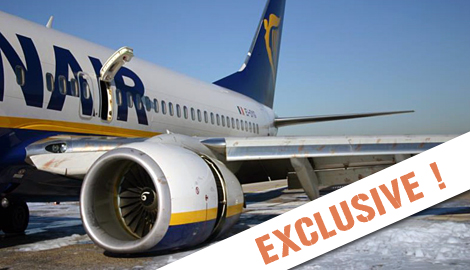 Ryanair flight FR4102 accident occurred on 10 November 2008, at 06.56 ‘(07.56’ local), on the Rome Ciampino airport and involved the aircraft type B737-8AS registration marks EI-DYG.
On 10 November 2008, at 05.30′, the aircraft Boeing 737-8AS EI-DYG took off from Frankfurt Hahn airport (EDFH) to Rome Ciampino (LIRA), with 166 passengers and 6 crew members on board.
When approaching the destination airport, in a very short final, collided with a big flock of starlings.
At the sighting of the birds, the crew interrupted the landing procedure and performed a go-around maneuver, but both engines did not deliver the needed thrust ; as a result, the aircraft rapidly lost speed and altitude and impacted heavily the runway.

During the ground run, the left main landing gear of Ryanair flight FR4102 was detached from its own anchorages and the lower part of the fan cowl of the left engine came into contact with the runway.
The aircraft continued its run on the ground until it was completely stopped, abeam the threshold of RWY 33.
The 6 crew members and the 166 passengers carried out the evacuation of the aircraft without further inconveniences.

The aeronautical literature, in the years following the event, underlined, through
articles, the criticality related to a go-around following a bird strike, for reasons e
considerations below:

The accident of Ryanair flight FR4102 was caused by an unexpected loss of thrust on both enginesconsequent to a massive impact with birds, during the go-around maneuver.
The loss of thrust prevented the crew from successfully carrying out the go-around and led the aircraft to a non-stabilized contact with the runway.

The following factors contributed to the event:

Download Original Report Download English Report
Aviation Accidents Database made an unofficial english translation of the original report : it is copyrighted, you are welcome to download it here and distribute under Creative Commons BY-NC-ND