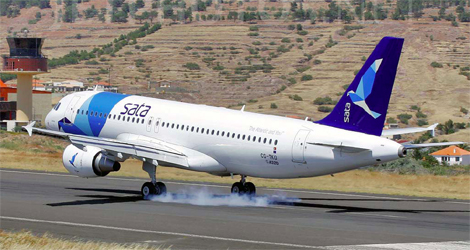 With seven crew (2 pilots and 5 cabin crew) and 166 passengers on board, the aircraft took-off from Lisbon at 18:40 hours and by 20:30 hours, the pilot started the approach for landing, supported by the ILS for runway 30 at João Paulo II International Airport at Ponta Delgada.

After an ILS approach the aircraft touched down hard at 20:45 hours, bounced to 12ft height above the runway and it touched again the ground, in a severe hard landing situation.

At the ramp, crew and ground support engineer performed a visual inspection to the aircraft, focusing their attention on landing gear status, but nothing abnormal was detected and the aircraft flew back to Lisbon.

The Data Management Unit (DMU) printed a Load Report presenting aircraft excessive landing values but no one was able to decode them.

No report was written on Technical Log book. The aircraft continued its programmed flights until it entered an “A” check, two days after.

Based on the DMU Load Report recorded at the event time, the Maintenance carried out an inspection foreseen on AMM 05-51-11, finding some damage on LH and RH wing shroud box lower panels.

Aircraft manufacturer was consulted and a thorough dedicated Inspection was performed.

SATA Internacional flight RZO129 had a hard and bounced landing : second touchdown was at 4,86 g.

The GPIAA Investigation Team determine that the probable cause of this accident was a hard landing, of significant vertical acceleration (4.86g), due to aircraft loss of lift caused by Ground Spoilers extension in flight, during a bounce of great amplitude (12ft AGL).

Contributing factors to this accident were: