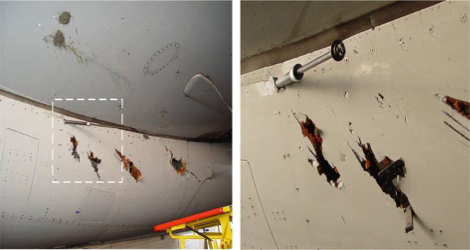 The airplane with 11 crew and 114 passengers aboard was on a LTU flight LT230 from Düsseldorf, Germany, to Saloniki, Greece. At 10501 hrs in Flight Level (FL) 105 during climb the crew noticed a loud bang. Simultaneously, the aircraft began to yaw in combination with unusual sounds. The crew checked whether doors and hatches were properly locked.

Since the Electronic Centralized Aircraft Monitor (ECAM) did not indicate any malfunctions the LTU flight LT230 was continued. A short while later the cabin crew noticed that a large part of the left engine cowling was missing and reported it to the pilots.

The crew decided to abort the LTU flight LT230 and return to Düsseldorf. They did not declare an emergency. The airplane landed in Düsseldorf without any further problems. At the parking position the fire brigade determined that the left wing leaked fuel.

The sole objective of the investigation is to prevent future accidents and incidents. The investigation does not seek to ascertain blame or apportion legal liability for any claims that may arise.

This document is a translation of the German Investigation Report. Although every effort was made for the translation to be accurate, in the event of any discrepancies the original German document is the authentic version.