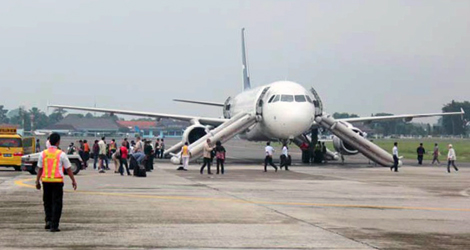 On 6 March 2012, an Airbus A319 aircraft registered 9V-SBH, was operating a Silkair flight SLK112 passenger flight.

The aircraft departed from Changi Airport (WSSS), Singapore to Adi Soemarmo Airport (WARQ), Solo Indonesia. There were 131 persons on board, consisted of two pilots, five cabin crews, and 124 passengers (120 adult and 4 children).

The brake assembly number 2 of Silkair flight SLK112 was replaced at the night stop before departed to Adi Soemarmo airport.

The aircraft landed at 0158 UTC. During landing roll of Silkair flight SLK112, the controller observed smoke on the left main landing gear and informed to the SLK pilot. The controller communicated in unclear English.

The communication was assisted by the pilot of another aircraft (LionAir) by translating to and from Indonesia and English.

For five minutes the pilot of Silkair flight SLK112  asked Marmo Tower for more information to find out whether there was smoke and/or fire. At 0204 UTC, Marmo Tower said to the pilot that there was fire and the pilot made decision to conduct passenger emergency evacuation between the taxiway Bravo and apron.

The investigation found no evidence that there had been fire.

The investigation found that the controllers were not eligible to conduct duty as controller.

Uncertain identification combined with ineffective communication by the controller caused the pilot to make the emergency decision.