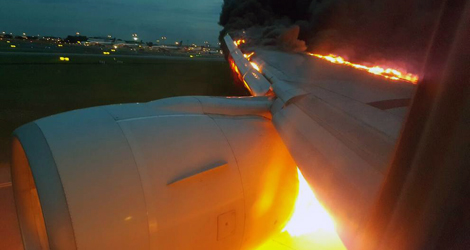 Singapore Airlines flight SQ368 was operated with a Boeing 777-300ER registered 9V-SWB that departed from Singapore Changi Airport at 0224 hrs for Milan Malpensa on 27 June 2016.

As Singapore Airlines flight SQ368 was climbing to its cruising altitude, the flight crew encountered weather which required them to perform weather avoidance manoeuvers. About 30 minutes into the flight, when the aircraft had climbed to 30,000 feet, the flight crew noticed that the oil quantity parameter in the Engine Indicating and Crew Alerting System (EICAS) showed 17 units for the left engine but only 1 unit for the right engine.

The flight crew of Singapore Airlines flight SQ368 looked through their available manuals but was unable to find an appropriate procedure that addressed the low engine oil quantity situation.

At 0304 hrs, the Pilot-in-command (PIC) of Singapore Airlines flight SQ368 contacted their company’s engineering control centre for assistance via satellite communication (SATCOM). The PIC informed the engineer on duty of the engine parameters and asked if it was safe to continue with the flight. The engineer informed the PIC that since the oil pressure was within the normal operating range, there could be a faulty oil quantity indication. The engineer advised the PIC to continue with the flight but monitor the right engine oil parameters. The engineer told the PIC that he would also contact the company’s technical services personnel for advice.

After being briefed by the engineer on the situation, the technical services personnel believed that the problem with Singapore Airlines flight SQ368 was a faulty oil quantity indication.

As the aircraft had just departed and was not far from Singapore, the technical services personnel recommended that the aircraft return to Singapore.

According to the flight crew, as they were passing waypoint VPG at approximately 0320 hrs, the First Officer performed a routine fuel quantity check. After comparing the TOTALIZER fuel quantity with the planned fuel remaining quantity, it was determined that the fuel consumption was better than expected as the fuel on board was 600 kg more than the expected value.

At 0328 hrs, the engineer sent a message via the Aircraft Communication and Reporting System (ACARS) to the flight crew of Singapore Airlines flight SQ368 informing them about the recommendation by the technical services personnel for the aircraft to return to Singapore and requesting them to contact the engineering control centre.

Shortly after the conference call ended, the flight crew of Singapore Airlines flight SQ368 felt an unusual vibration in the control column and cockpit floor.

The flight crew tried to diagnose the problem by changing the engine power settings and found that the vibration disappeared when the power of the right engine was reduced. At about the same time, the flight crew caught a momentary wisp of burnt smell in the cockpit but the smell disappeared quickly.

According to the cabin crew, the smell was particularly strong in the business class cabin, in the forward part of the aircraft. The cabin crew distributed wet towels for the passengers to hold over their nose and breathe through it. 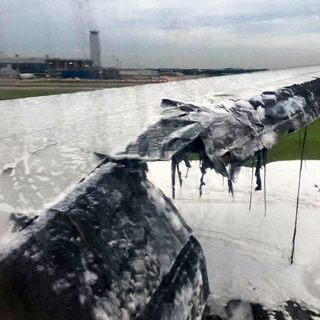 However, the flight crew did not perform the FUEL LEAK checklist. According to the flight crew, they believed the CALCULATED fuel quantity was no longer accurate in view of the following:

Several times on the return journey and as the aircraft approached Singapore, the flight crew was queried by the Air Traffic Control (ATC) if they needed any assistance. The flight crew replied that, other than the need to fly at the lower altitude of 17,000 feet, no assistance was needed as all other operations were normal.

Prior to landing, the flight crew jettisoned about 41,500 kg of fuel to bring the aircraft to below its maximum landing weight.

At 0649 hrs, the aircraft landed on the runway.

About 20 seconds after the thrust reversers on both engines were deployed, the occupants in the cabin heard two loud bangs, accompanied by two flashes, originating from the right engine area. At the same time, the flight crew heard a soft thud.

The flight crew did not receive any fire warning in the cockpit.

The ARFF which was on standby with four foam tenders and one water tender, entered the runway as soon as clearance to enter the runway was given by the Control Tower. The first foam tender arrived on scene after 57 seconds and started discharging foam at the right engine.

The fire was eventually brought under control (more on firefighting in paragraph 1.5). Disembarkation commenced at 0710 hrs (21 minutes after landing, ndr) via a mobile stairs positioned at the front left door of the aircraft.

All occupants, including the flight crew, vacated the aircraft by 0731 hrs.

The flight crew depended on the fire commander as their sole information source when deciding whether an evacuation was needed. Several other resources which could have aided them in making their decision were not utilised.

Dan Air Services B707 G-BEBP was engaged on a non-scheduled international cargo night on behalf of International Aviation Services for Zambian Airlines. It was carrying a through load of palletised freight from London Heathrow to Lusaka International Airport, with...
Read More