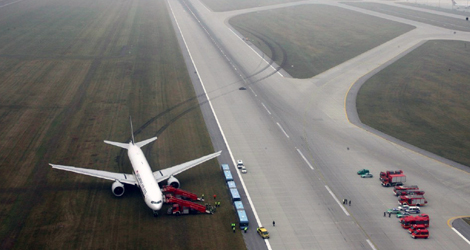 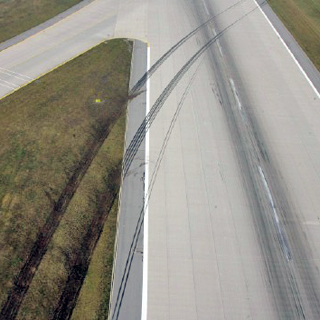 The copilot of Singapore Airlines flight SQ327 was initially Pilot Flying (PF) during the flight Manchester – Munich. When it became apparent that the weather in Munich would be below the values under which the copilot was allowed to perform the landing, the Pilot in Command (PIC) became PF and the copilot Pilot Monitoring (PM).

During the approach briefing the crew had decided to perform an automatic approach and landing.

When the B777 was about 30 ft above the runway it slowly banked to the left. The airplane touched down first with its left main landing gear. The Flight Data Recorder (FDR) showed that at that moment the autopilot changed to Rollout Mode.

The calculated touch-down point was about 490 m after the threshold.

In the further course of events, Singapore Airlines flight SQ3267 moved towards the left side of the runway and veered off in the area of taxiway B4.

About two minutes afterwards the fire brigade had reached the airplane.

With the help of two stairs from the fire brigade the passengers were evacuated.
All passengers and crew members were uninjured.

The crew stated that during the approach and the landing no system warnings had been indicated. The PIC stated he had tried to initiate a go-around procedure by pushing the TOGA levers when the airplane began to veer to the left, but the airplane did not respond. At the same time he retracted the ground spoilers which had automatically been deployed at the time of the touch down.

An airplane (BAe AVRO) taxied at the same time over the High Speed Taxiway B4 onto the runway and started the take-off run about 20 seconds later. At that time the B 777 was about 2.1 NM prior to the runway in an altitude of about 700 ft AGL. At 12:09:09 hrs the B777 crossed the threshold of runway 08R in an altitude of 40 ft.

Six seconds later the BAe AVRO left the end of the runway in an altitude of about 380 ft. At 12:09:29 hrs the BAe AVRO overflew the ILS localizer antenna of runway 08R in 740 ft.