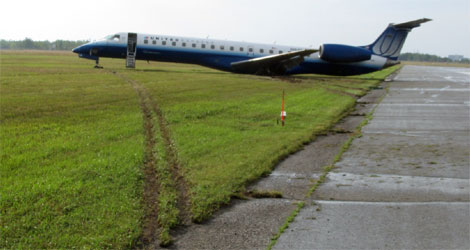 Shortly after touching down, the aircraft skidded off the left side of the runway. There were no injuries to the 44 passengers and 3 crew members aboard. All of the occupants evacuated safely, using the main cabin door. During the runway excursion, both sides of the main landing gear collapsed, damaging the wing and causing a fuel leak. There was no fire, and the emergency locator transmitter did not activate.

1. Heavy rainfall before and during the landing resulted in a 4–6 mm layer of water contaminating the runway.

2. The occurrence aircraft’s airspeed during final approach exceeded the company-prescribed limits for stabilized approach criteria. As a result, the aircraft crossed the runway threshold at a higher than recommended VREF airspeed.

3. A go-around was not performed, as per standard operating procedures, when the aircraft’s speed was greater than 5 knots above the appropriate approach speed during the stabilized portion of the approach.

4. The application of engine thrust just before touchdown caused the aircraft to touch down 3037 feet from the threshold at a higher than recommended airspeed.

5. The combination of a less than firm landing and underinflated tires contributed to the aircraft hydroplaning.

6. The emergency/parking brake was applied during the landing roll, which disabled the anti-skid braking system and prolonged the skid.

7. The aircraft lost directional control as a result of hydroplaning and veered off the runway.