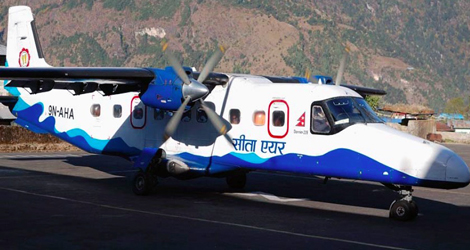 The Commander of SITA AIR flight ST601 was the Pilot Flying (PF) which was in accordance with common practice for flight crews operating this route.

ATC broadcast a change in the QNH to 1018 HPa at 0029 hrs. At 0028 hrs (0613 am), the Co-pilot asked ATC for taxi clearance and 9N-AHA taxied towards Intersection 2 for Runway 20. While taxiing towards the runway the flight crew of SITA AIR flight ST601 carried out the before takeoff checklist during which the Commander confirmed that Flaps 1 was set and all four booster pumps were ON. There was no emergency brief or discussion about the reference speeds to be used during the takeoff. The flight crew changed frequency and contacted the tower controller who gave them clearance to enter Runway 20 from the intersection and wait for clearance to takeoff.

The Commander asked for the line-up checks to be completed during which the Speed Lever was selected to HIGH. After lining up, the Commander said “THERE IS A BIRD” and, three seconds later “I WILL TAKE FLAPS TWO” which was acknowledged by the co-pilot.

The aircraft was cleared for departure and began its takeoff run at 0032 hrs. Two seconds after beginning the takeoff roll, the Commander said “WATCH OUT THE BIRD“. The Co-pilot called “50 KNOTS” as the aircraft approached 50 kt and the Commander replied “CHECK”.

SITA AIR flight ST601 accelerated to 89 kt in the two seconds after lift-off and then decelerated to 77 kt as it climbed to 100 ft AAL.

SITA AIR flight ST601 then flew level for 14 seconds during which time the following occurred:

It departed controlled flight, most probably left wing low, and crashed into a small open area 420 m south-east of the end of Runway 20. A runway inspection found the remains of a bird, identified as a “Black Kite”, at a position 408 m from Intersection 2. No bird strike was reported in relation to any other departure.