Skyservice Airlines flight SSV5044 was an Airbus A320-232 (A320) that departed from Toronto Lester B. Pearson International Airport at 1823 for Juan Gualberto Gomez International Airport (MUVR) in Varadero, Cuba. The flight en route was uneventful.
Before receiving descent clearance, the captain, who was the pilot flying (PF), briefed for the VOR ILS Runway 06 approach at MUVR. The captain initiated the descent 160 nautical miles (nm) from MUVR.
Once under the control of the Havana area control centre (ACC), the flight was cleared to fly direct to the eight DME final approach fix (FAF) for the VOR ILS Runway 06 approach.

The flight was following a Boeing 737 (B737), that was approximately 20 nm ahead on the same approach to MUVR. Except for a few rain showers to the left of its track, there was no significant weather showing on the aircraft’s weather radar. Approximately 3 minutes later, the ACC advised the crew that the visibility at the airport was 2 kilometres in rain.

The crew acknowledged this information and then discussed missed approach scenarios. Approximately 19 minutes before SSV5044’s arrival at MUVR, the reported visibility decreased to 1000 metres in heavy rain. That information was not passed on to the crew of SSV5044. 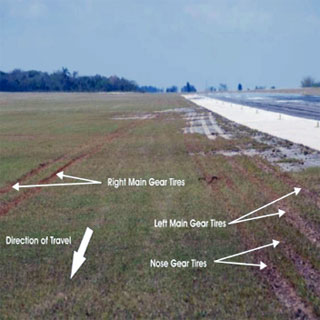 As the aircraft turned onto final approach, the preceding B737, which was now 7 nm ahead, executed a go around. When the flight crew of the B737 called the ACC to advise them of the go around, they did not provide a reason or offer a pilot report (PIREP).
In addition, no information was requested by or issued to the crew of SSV5044 regarding the reason for the go around of the preceding aircraft. The crew of SSV5044 reviewed the approach minimums and its fuel situation to ensure the quantity was sufficient for a possible missed approach and flight to its alternate airport.
Heavier precipitation was visible on the weather radar as the aircraft intercepted the glideslope. The aircraft descended below 1000 feet above ground level (agl) in a stable approach. The runway environment came into sight at approximately 900 feet agl. The crew configured the aircraft and completed the landing checklist.
With the runway in sight, the crew contacted MUVR tower whereupon it received its landing clearance. The wind was reported as 060° magnetic (M) at 12 knots. Throughout the last 400 feet of the approach, the flight data recorder (FDR) data indicated the wind was at 045°M, at 15 knots, and decreased in speed to 10 knots at touchdown.

As the aircraft descended through approximately 500 feet agl the rain increased in intensity. Just prior to reaching the decision height (DH) of 200 feet agl, the autopilot was disconnected. At the DH, the aircraft was established on both the glideslope and the localizer. FDR data indicates that the approach was stable.

Shortly after the autopilot was disconnected, the aircraft started to descend below the glideslope and drift slightly to the right. The captain applied nose-up elevator and left aileron. The aircraft then quickly passed left of the runway centreline and continued to descend below the glideslope. The captain corrected with some right aileron control input which was maintained until just before touchdown.
The aircraft crossed the threshold at approximately 20 feet agl with the right bank angle increasing through 6°. In the flare, at 5 feet agl, the right bank angle reached a maximum of 10.9°.
Just prior to touchdown, the precipitation intensified and the visibility decreased to the point where the crew lost most visual references. At this point, the aircraft was in a low-energy state. An attempt to commence a go-around or balked landing while in the low-energy landing regime is a high-risk manoeuvre. At that point, given the aircraft configuration, its low energy state and position relative to the runway, a go-around was rejected as an option and the captain committed to landing the aircraft.

contaminated runway and some form of hydroplaning, caused the aircraft to drift until it left the runway

The crew ascertained that the aircraft was fit to taxi to the gate and did so. The crew also attempted to inform the control tower of the excursion but the airport controller’s reaction suggests that the controller did not hear or understand the communication at that time. One unidentified pilot from another aircraft contacted the control tower to ask if there were any thunderstorms in the area and talked to the captain of SSV5044. The unidentified pilot was told about the possible excursion and another unidentified aircraft flight crew also acknowledged the transmission. It was only after the aircraft was shutdown at the gate that the crew was able to confirm that the proper authority would be advised of the excursion and that a runway inspection would be conducted. After shutdown, the crew also called the company to report its arrival time and the runway excursion.

Findings as to Causes and Contributing Factors

The Air Contractors flight DHL6321 crew took off from Leipzig Airport (Germany) at 3 h 38 bound for Bratislava Airport (Slovakia). The approximately forty-five minutes flight took place without incident and the crew was cleared for the ILS approach to runway 22....
Read More