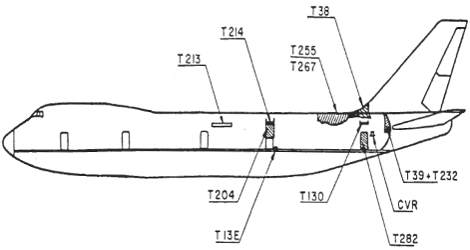 On November 27th 1987 at 14:23, SOUTH AFRICAN AIRWAYS flight SA295, a Boeing 747-244B Combi of South African Airways, departed from Taipei’s Chiang Kai Shek Airport for Mauritius’ Plaisance Airport with 159 persons on board. In the main deck cargo hold 6 pallets of cargo had been loaded. Some 9 hours out and some 46 minutes before the estimated time of arrival at Plaisance the flight deck informed the approach control at Plaisance that there was a smoke problem In the aeroplane and that an emergency descent to flight level (FL) 140 had been Initiated.

At about 00: 07 SOUTH AFRICAN AIRWAYS flight SA295 crashed into the sea. The wreckage, consisting of thousands of fragments, sank to the ocean bottom at depths of the order of 15 000 feet (about 4,5 kilometers), although many of the lighter materials floated away on the currents.

Some of the latter Items were recovered from the sea, or from the sea-shores where they had been washed up far from the scene of the crash. Months later one such Item was found on a beach In Natal, over 2000 nautical miles away. There are clear

Indications that a fire developed In the right hand front pallet in the main deck cargo hold, that the fire got out of control and that it eventually led to the crash.

There were no survivors.

The State of Registry, the Republic of South Africa (RSA), was notified of the accident by Plaisance Air Traffic Control (Mauritius) at 01: 15 on November 28th 1987.

As the accident had occurred outside the territory of any State, the Investigation of the accident was conducted by the State of Registry In terms of paragraph 5.3 of Annex 13 to the Convention on International Civil Aviation. This was agreed to by the Government of Mauritius.

The Operator provided advisers and all possible assistance and logistic support needed in all the phases of the investigation. It also had full access to all available information. Full co-operation was given to the investigator-in-charge.

The State conducting the investigation (RSA) appointed an Accident Inquiry Board in terms of section 12 of the Aviation Act 74 of 1962. The Board comprised one member from each of the States of Japan, the Republic of China, Mauritius, the UK and the USA, and three members, including the Chairman, from the RSA. The members from japan, the Republic of China and Mauritius, were appointed by their respective governments. The members of the Board, by name, were Mr justice C S Margo, DSO, DFC, FRAeS, of the RSA, (Chairman), Mr justice H Goburdhun, of Mauritius, Mr George N Tompkins junior, of the USA, Mr G C Wilkinson, CBE, FRAeS, of the UK, Dr Y Funatsu, of ANA, japan, Mr J J S Germishuys, of the RSA, Dr J Gilliland, of the RSA, and Colonel Liang Lung, of the Republic of China.