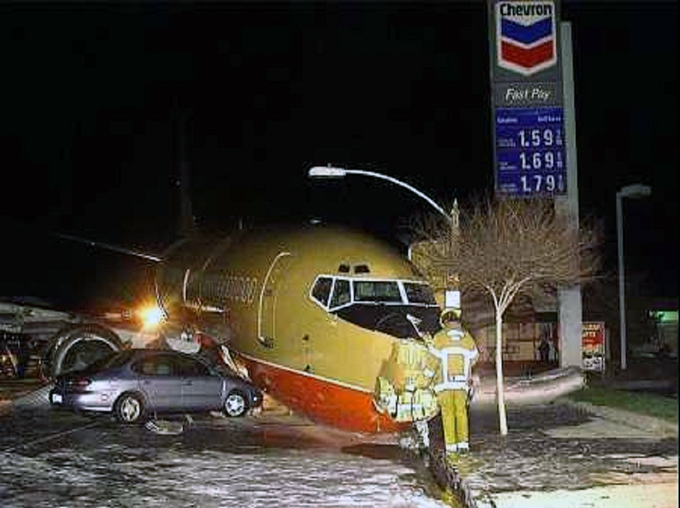 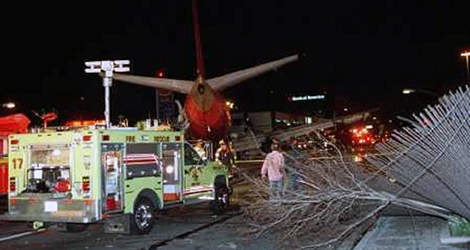 The airplane came to rest on a city street near a gas station off of the airport property. Of the 142 persons on board, 2 passengers sustained serious injuries; 41 passengers and the captain sustained minor injuries; and 94 passengers, 3 flight attendants, and the first officer sustained no injuries.

The airplane sustained extensive exterior damage and some internal damage to the passenger cabin.

Flight data recorder (FDR) data show that the airplane touched down at about 182 knots, which is 44 knots over the reference speed for this flight.

The flight, which was operating on an instrument flight rules flight plan, was conducted under 14 Code of Federal Regulations (CFR) Part 121. Visual meteorological conditions (VMC) prevailed at the time of the accident, which occurred in twilight lighting conditions.

The National Transportation Safety Board determines that the probable cause of this accident was the flight crew’s excessive airspeed and flightpath angle during the approach and landing and its failure to abort the approach when stabilized approach criteria were not met.

Contributing to the accident was the controller’s positioning of the airplane in such a manner as to leave no safe options for the flight crew other than a go-around maneuver.

Air France flight AFR4920 took off from runway 26 right at Roissy Charles de Gaulle Airport, shortly before rotation, the front right tyre (tyre No 2) of the left landing gear ran over a strip of metal, which had fallen from another aircraft, and was damaged. Debris...
Read More