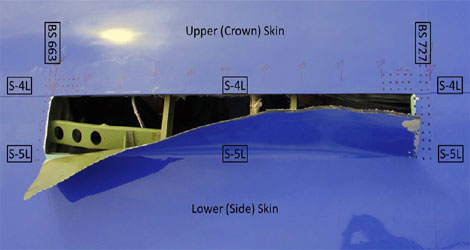 Of the 5 crewmembers and 117 passengers on board, one crewmember and one nonrevenue off-duty airline employee passenger sustained minor injuries. The airplane sustained substantial damage; postaccident inspection revealed that a section of fuselage skin about 60 inches long by 8 inches wide had fractured and flapped open on the upper left side above the wing.

At 1558:05, an unidentified sound was recorded on the cockpit area microphone. About 2 seconds later, the captain announced that the airplane had lost cabin pressurization and called for oxygen masks on; sounds consistent with increased wind noise were heard on the cockpit voice recording.

Cabin oxygen masks deployed, and about 1605, the cabin crew began relaying condition reports to the flight crew describing a 2-foot hole in the fuselage and one broken-nose injury of a cabin crewmember.

The airplane was cleared for further descent to 9,000 feet, and the captain requested radar vectors to the nearest suitable airport (NYL). The airplane landed about 1629 on runway 21R at NYL without further incident. The passengers deplaned via airstairs.

The National Transportation Safety Board determines that the probable cause of this accident was the improper installation of the fuselage crown skin panel at the S-4L lap joint during the manufacturing process, which resulted in multiple site damage fatigue cracking and eventual failure of the lower skin panel.

Contributing to the injuries was flight attendant A’s incorrect assessment of his time of useful consciousness, which led to his failure to follow procedures requiring immediate donning of an oxygen mask when cabin pressure is lost.