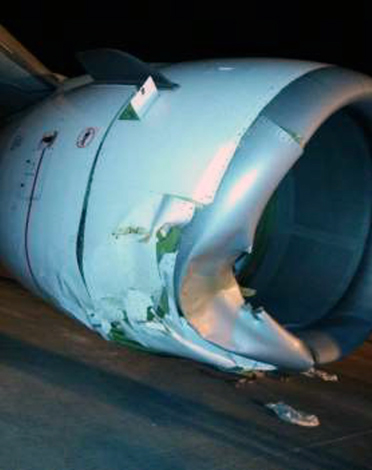 On 06.11.2014, Spicejet flight SG622 operated with a Boeing B737-800 aircraft registered VT-SGK was involved in an accident at Surat while taking off to operate scheduled flight to Delhi.

The flight was under the command of an ATPL holder; the First Officer was a CPL holder.

There were total of 151 passengers and 6 Crew members on board the aircraft.

During take-off roll of Spicejet flight SG622, when the aircraft was at around 350 meters from start of runway and about a meter or so, on the left of the centre line, the left engine of the aircraft hit a buffalo.

Immediately take-off was abandoned and aircraft brought back to Apron.

There was substantial damage to the engine while there was no fire or injury to any person on board. 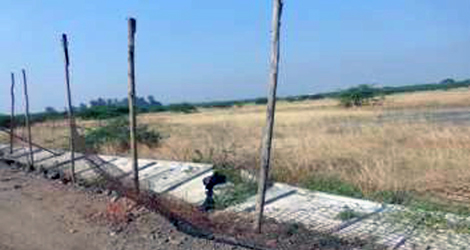 As per the fire staff on duty the same aircraft had operated flight SG623 (Delhi-Surat) and arrived into Surat at 1246 UTC.

Prior to the arrival of this inbound flight (SG-623), ATC had instructed the fire staff to inspect the runway.

The fire staff after carrying out inspection of the runway reported everything normal.

After landing the aircraft (SG623), back tracked on runway 22 and vacated the runway via ‘A’ for parking on bay number 1.

The aircraft was given taxi clearance via taxiway A at 1329 UTC. The visibility reported at the time of departure was 6 Kms with calm winds. There was no significant clouding. Temperature & Dew point were 29°C & 15°C respectively with QNH 1011.

After entering the RWY 04/22, aircraft backtracked and lined up on RWY 04 and reported ready for Take-off at 13:35 UTC.

Immediately the aircraft was cleared for take-off.

As per the pilot in command of Spicejet flight SG622, during take-off roll at about speed of 78 knots, he, in his peripheral view saw something moving towards the aircraft.

It was otherwise pitch dark and nothing was visible beyond the cone of aircraft lighting.

Thereafter he heard a “Bang” sound and it was felt as if the aircraft had gone over a bump. He immediately called reject and initiated the same.

ATC was informed by the flight crew about the reject take off. It was also informed that there was a dog hit on the left side of the aircraft. Since all the parameters were normal and no sign of fire or vibration, the flight crew requested ATC for permission to return to Bay. With the permission of ATC the aircraft returned to bay 01.

The engines were shut down and all necessary checks were carried out prior to and after the shut down. Briefing of the cabin crew and passengers was carried out.

During walk around inspection Pilot in Command observed that the engine cowl was badly damaged and there were holes on the sides of engine.

It was decided to disembark passengers. Safe normal disembarkation was carried out without any injury. Fire Station in the mean time called up ATC to confirm whether there is any problem with Spicejet aircraft and asked for permission to enter runway. ATC instructed fire personnel not to enter runway. It was also informed that all operations are normal and it was an animal hit.

CNS operational jeep requested ATC to cross runway for which the ATC granted the permission.

CNS Jeep reported to ATC Tower that there are two Buffalos on runway one is dead and other is roaming on the runway.

The runway was immediately closed for operations. After removal of the dead buffalo and inspection of runway it was declared operational.

The accident was caused as the aircraft during its initial take-off roll hit an animal (buffalo) standing on the runway, resulting in damage to its engine.

The animal entered the operational area and the runway because of several breaches in the boundary wall.

Aloha Airlines flight AQ243 : on April 28, 1988, an Aloha Airlines Boeing 737, N73711, based at the Honolulu International Airport, Hawaii, was scheduled for a series of interisland flights to be conducted under Title 14 Code of Federal Regulations (CFR) Part 121. A...
Read More