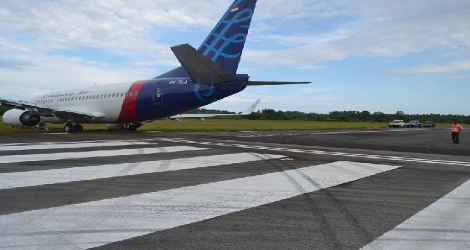 Prior to leave the hotel at Medan the PIC was explained that he had stomach ache and the crew noticed that the PIC went to the toilet several times during the flight from Medan to Minangkabau. 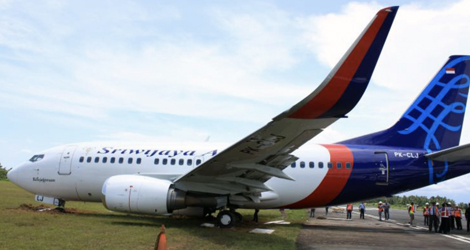 While stopping on the parking stand number 4, the aircraft did not stop on the proper position. It was stop around 4 meters further than the marking line with the left wing was near and almost hit the aerobridge. The marshaller informed that he already gave stop signal, however the aircraft kept moving. The aircraft then pushed back to the correct position and disembarking all passengers.

There was no hazard report made by the Sriwijaya air staff or Minangkabau staff in respect of this occurrence.

After the preparation completed, the flight then continued to Soekarno-Hatta Airport. In this flight the PIC was planned to act as Pilot flying and the SIC as Pilot Monitoring.

At 1142 UTC (1842 LT) the pilots received clearance to taxi out and enter back track runway 15. When approaching the threshold runway 15, the pilot turned the aircraft to the left.

Sriwijaya Air flight SJ021 stopped at 1155 UTC on approximate heading of 270° with the nose wheel out of the runway about 4.2 meters and in full deflection to the left.

On the runway was found 22 meters of rubber skid mark of the nose wheel beginning from the center guide until aircraft stopped.

The FDR data revealed that during the initial turn for a line up on the runway 15, the aircraft taxi speed was 21 knots.

There was no discrepancy reported of the aircraft and runway lighting system prior and during the serious incident.

During this serious incident, the weather reported by the local meteorology office was fine with horizontal visibility was 8 km.

The airport rescue and fire fighting arrived few minutes after the occurrence and observed the condition surround the aircraft and also assisted the passenger disembarkation process.

The aircraft evacuated to airport main apron one day after the serious incident at 2100 UTC (0400 LT).

On 21 September 2004, at time 1302, a B747-400F operated by Korean Air was taking off from Oslo Airport Gardermoen for a KOREAN AIR flight KAL520 to Incheon International Airport, Seoul, Republic of Korea. During take-off run, the aircraft started to autorotate at...
Read More