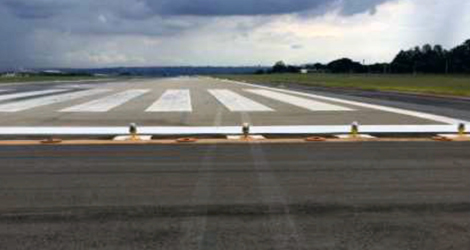 TAM flight JJ3451 departed from Guararapes – Gilberto Freyre Airport (SBRF), Recife, Pernambuco to Pres. Juscelino Kubitschek Airport (SBBR), Brasília, Distrito Federal, for a regular transport flight with 06 crewmembers and 154 passengers on board.
On the final approach of RNAV (GNSS) Y procedure, for landing on runway 29R at SBBR, when passing the MDA (3.880 ft / 401ft AGL) and with the runway in sight, the autopilot of TAM flight JJ3451 was disengaged and the crew continued to land with visual references, until they encountered light rain conditions that quickly became a heavy rain.

They lost visual contact with the runway, and could not complete the approach.
The pilot initiated the reject landing procedure, but lost height, and the aircraft touched down prior to the start of the runway. Shortly after it touched down, the right landing gear struck one of the runway threshold lights.
The crew performed another RNAV (GNSS) Y procedure and made a safe final landing.
The aircraft sustained damage to the right landing gear tires (#3 and #4) and some minor damage to the fuselage.
None of the crewmembers or passengers was injured.