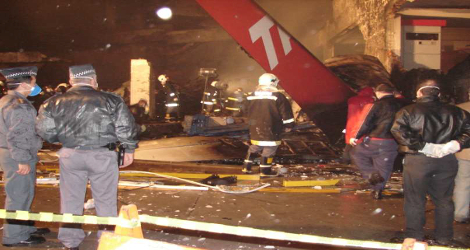 There were a total of 187 souls on board the aircraft, being six active crew members and 181 passengers, including 2 infants and 5 extra crew members (not on duty).

The weather prevailing along the route and at the destination was adverse, and the crew had to make a few deviations. Up to the moment of the landing, the flight occurred within the expected routine.

The TAM Airlines flight JJ3054 was operating with the number 2 engine reverser de-activated, in accordance with the Minimum Equipment List (MEL).

According to information provided to the TWR by crews that had landed earlier, the active runway at Congonhas (35L) was wet and slippery.

During the landing, at 18:54 local time (21:54 UTC), the crew noticed that the ground spoilers had not deflected, and the aircraft, which was not slowing down as expected, veered to the left, overran the left edge of the runway near the departure end, crossed over the Washington Luís Avenue, and collided with a building in which the cargo express service of the very operator (TAM Express) functioned, and with a fuel service station.

All the persons onboard TAM Airlines flight JJ3054 perished. The accident also caused 12 fatalities on the ground among the people that were in the TAM Express building.

The TAM Airlines flight JJ3054 was completely destroyed as a result of the impact and of the raging fire, which lasted for several hours.

The accident of TAM Airlines flight JJ3054 caused severe damage to the convenience shop area of the service station and to some vehicles that were parked there.

The growth of the operator accentuated the effects of the lack of coordination among its diverse sectors, hindering the oversight at all management levels;

There are various records of occurrences in which the airplane had an inoperative thrust reverser, and the crew inadvertently placed a thrust lever in the “REV” position with the other one in the “CL” position;