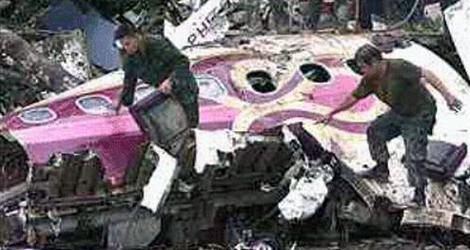 On 11 December 1998 at approximately 17:54 hours Airbus A310-204, belonging to Thai Airways International Public Company Limited, of nationality and registration HS-TIA departed on a passenger scheduled flight TG261 en route on airways TG458 at flight level 310 from Bangkok international Airport to Surat Thani Airport. There were 14 crew and 132 passengers on board.

At 18:26 hours, the co-pilot first established contact with Surat Thani approach controller while the aircraft was 70 nautical miles away from Surat Thani Airport, Surat Thani approach controller gave instructions to execute Instrument approach procedures expecting the aid of VOR DME would be used. At runway 22 surface wind was calm with the visibility of 1.500 meters, light rain, and cloud base at 1800 meters feet. Temperature and dewpoint were 24/22 degrees Celsius respectively.

At 18:39 hours, the co-pilot contacted Surat Thani aerodrome controller and reported over the intermediate fix (IF). The controller informed him that the precision approach path indicators (PAPI) on the right side of runway 22 were unserviceable while the lefts were in use. The distance between each runway edge light was 120 metres. The distance between each runway end light and runway threshold light was 6 metres and the pilot should be aware that there was an obstacle at 400 metres from runway 22 threshold.

At 18:41 hours, the co-pilot reported passing final approach fix (FAF). The aerodrome controller informed the pilot that the aircraft was not in sight, yet ; however, it was clear to land on runway 22. The surface wind was blowing from 310 degrees at a velocity of 5 knots so the pilots should be careful of the slippery runway.

Aerodrome controller requested for FAF report from heading inbound and informed the pilot that the visibility was 1,000 meters with light rain at the airport. Also, it was clear to land on runway 22. The surface wind was blowing from 290 degrees at a velocity of 3 knots and the pilot should be careful with the slippery runway.

The co-pilot acknowledged at the time of 19:05:43 hours and after that the contact was lost.

After careful consideration, the Aircraft Accident Investigation Committee of the Kingdom of Thailand ultimately came to the conclusion that the accident occurred because the aircraft entered into stall condition which might be caused by the followings: