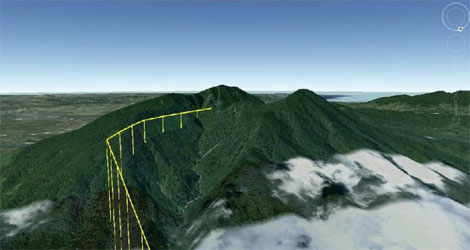 Sukhoi-Alenia – Superjet 100 (RRJ-95B) flight RA36801 , registered 97004, on 9 May 2012 was conducting a demonstration flight from Halim Perdanakusuma International Airport, Jakarta. The accident flight was the second of two scheduled demonstration flights. On board the flight were two pilots, one navigator, one test flight engineer, and 41 passengers.
The passengers consisted of 4 Sukhoi Civil Aircraft Company (SCAC) personnel, one engine manufacturer (SNECMA) personnel, and 36 invited passengers (including one American, one French and 34 Indonesian nationalities). The flight was planned under the Instrument Flight Rules (IFR) at an altitude of 10,000 feet and the estimated elapsed time was 30 minutes with total fuel endurance of 4 hours.
The area for the demonstration flight was over “Bogor” Area while the pilot might assume that the flight was approved to 20 Nm on radial 200 HLM VOR. The available charts on board the aircraft did not contain information relating to the “Bogor” Area and the nearby terrain. The PIC acted as pilot flying while the SIC acted as pilot monitoring during this flight. In this flight, a representative of a potential customer sat on the observer seat (jump seat) in the cockpit. At 0720 UTC, the flight took off from runway 06 then turned right to intercept radial 200 from HLM VOR and climbed to 10,000 feet. At 0724 UTC, the pilot contacted Jakarta Approach and informed that the flight was established on radial 200 degrees HLM VOR and reached 10,000 feet. At 0726 UTC, the pilot contacted Jakarta Approach and requested for descent to 6,000 feet and subsequently requested to make a right orbit and was approved by Jakarta Approach controller.

At 0732:26 UTC, the aircraft impacted a ridge of Mount Salak on 28 Nm HLM VOR on radial 198 at coordinate 06°42’45”S 106°44’05”E, at approximately 6,000 feet ASL. 38 seconds prior to impact, the Terrain Awareness Warning System (TAWS) audio warning “TERRAIN AHEAD, PULL UP” activated once and “AVOID TERRAIN” activated 6 times.
The PIC inhibited the TAWS system assuming that the warning was a problem on the database. Seven seconds prior to impact, the flight warning system audio “LANDING GEAR NOT DOWN” activated. At 0750 UTC, the Jakarta Approach controller on duty noticed that the flight target disappeared from the radar monitor. There was no alert on the Jakarta Radar system prior to the disappearance of the target. On 10 May 2012, the location of the aircraft was identified by the Search and Rescue helicopter pilot. All occupants were fatally injured and aircraft was destroyed.

A simulation test suggested that a recovery action might have avoided the collision with terrain up to 24 seconds after the first TAWS warning. Jakarta Radar services had not established a minimum altitude for vectoring aircraft for certain areas and the Minimum Safe Altitude Warning (MSAW) did not provide warnings to the Jakarta Approach controller before the aircraft impacted.
The investigation concluded that the factors contributing to this accident were:
a. The crew were not aware of the mountainous area surrounding the flight path due to various factors resulting in disregarding the TAWS warning.
b. The Jakarta Radar service had not established the minimum vectoring altitudes and the system was not equipped with functioning MSAW for the particular area surrounding Mount Salak.
c. Distraction to the flight crew from prolonged conversation not related to the progress of the flight resulted in the pilot flying did not continue to change the aircraft heading while in orbit. Consequently, the aircraft unintentionally exited the orbit.