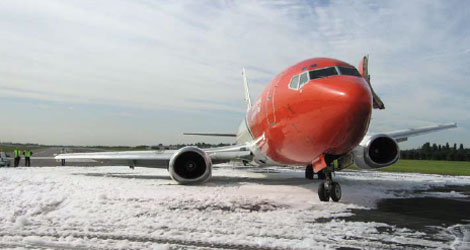 The weather conditions at EMA required a CAT IIIA approach and landing. On approach, at approximately 500 feet agl, the crew were passed a message by ATC advising them of a company request to divert to Liverpool Airport.

The commander inadvertently disconnected both autopilots whilst attempting to reply to ATC. He then attempted to re-engage the autopilot in order to continue the approach.

The aircraft diverged to the left of the runway centreline and developed a high rate of descent.

The commander commenced a go-around but was too late to prevent the aircraft contacting the grass some 90 m to the left of the runway centreline. The aircraft became airborne again but, during contact with the ground, the right main landing gear had broken off.

The crew subsequently made an emergency landing at Birmingham Airport (BHX).

at approximately 500 feet agl, the crew of TNT Airways flight TAY325N were passed a message by ATC advising them of a company request to divert to Liverpool Airport.