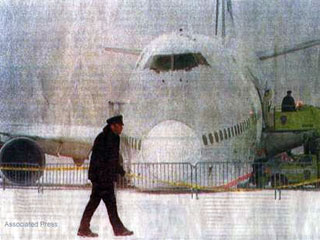 Tower Air flight TOW41 sustained substantial damage. The weather at the time of the accident was partially obscured, with a 700-foot broken cloud ceiling, 10 mile visibility, light snow, and fog.

The National Transportation Safety Board determines that the probable cause of the Tower Air flight TOW41 accident was the captain’s failure to reject the takeoff in a timely manner when excessive nosewheel steering tiller inputs resulted in a loss of directional control on a slippery runway.

Tower Air flight TOW41 : “current Boeing 747 flight manual guidance is inadequate about when a pilot should reject a takeoff following some indication of a lack of directional control response”.

The safety issues discussed in this report include :