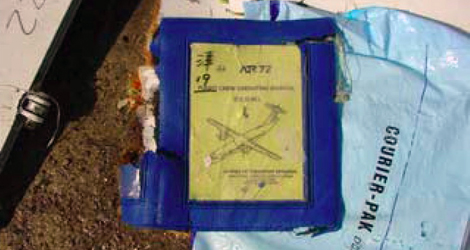 On December 21, 2002, at 0152 Taipei local time, TransAsia Airways flight GE791 cargo, aircraft type ATR72-200, registration B-22708, encountered a severe icing during its flight and crashed into the sea 17 kilometers southwest of Makung city, Penghu Islands. Both pilots (CM-1 and CM-2) on board were missing.

It reached the assigned flight level 180 (FL 180) at 01:25 and joined A-1 when passing MKG VOR/DME. According to the Meteorological Conditions data, the ground temperature was 20 degrees Celsius when GE791 departed from CKS International Airport and the estimate temperature at the altitude of 18,000 ft of accident area was minus 9 degrees Celsius.

The Flight Data Recorder (FDR) parameters of Transasia Airways flight GE791 showed that the airframe de-icing system was activated during the periods of 0134 to 0137 and 0141 to 0152 (when the FDR stopped recording) respectively.

According to the Cockpit Voice Recorder (CVR) transcript :

0150:55 CM-1: This speed is getting slower it was a hundred two hundred one hundred and ninety now one hundred seventy

Furthermore, the FDR has shown:

At 0152:09, a left bank developed and reached up to 48.9 degrees two seconds later. From then on, the bank degrees were constantly changing until the FDR stopped with the biggest one exceeding 90 degrees. The maximum vertical acceleration speed was 4.02G at 0152:45.375.