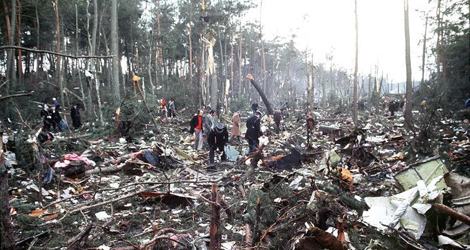 Turkish Airlines flight TK981 after a stop at Orly and a delay to its schedule because of the last minute embarkation of numerous passengers, TC-JAV took off for London at 1132 hrs.

Shortly after 1140 hrs, when the Turkish Airlines flight TK981 had reached 12,000 feet during climb, the Air Traffic Control recorded a transmission in the Turkish language, partly covered by heavy background noise and accompanied by the pressurization warning and then the overspeed warning; at the same time the aircraft radar return split in two and the secondary radar label disappeared.

Some seventy seconds later Turkish Airlines flight TK981 flying at high speed and with a slight angle of descent, struck the treetops and disintegrated in the forest. 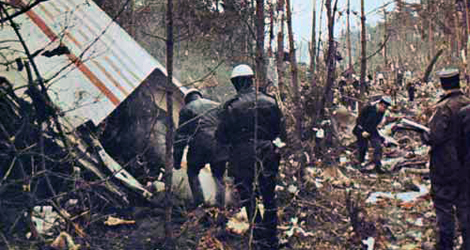 The accident of Turkish Airlines flight TK981 was the result of the ejection in flight of the aft cargo door on the left-hand side: the sudden depressurization which followed led to the disruption of the floor structure, causing six passengers and parts of the aircraft to be ejected, rending No.2 engine inoperative and impairing the flight controls (tail surfaces) so that it was impossible for the crew to regain control of the aircraft.

The underlying factor in the sequence of events leading to the accident was the incorrect engagement of the door latching mechanism before take-off. The characteristics of the design of the mechanism made it possible for the vent door to be apparently closed and the cargo door apparently locked when in fact the latches were not fully closed and the lock pins were not in place.

It should be noted, however, that a view port was provided so that there could be a visual check of the engagement of the lock pins.

This defective closing of the door of Turkish Airlines flight TK981 resulted from a combination of various factors:

Finally, although there was apparent redundancy of the flight control systems, the fact that the pressure relief vents between the cargo compartment and the passenger cabin were inadequate and that all the flight control cables were routed beneath the floor placed the aircraft in grave danger in the case of any sudden depressurization causing substantial damage to that part of the structure.

All these risks had already become evident, nineteen months earlier, at the time of the Windsor accident, but no efficacious corrective action had followed.

Dan Air Services B707 G-BEBP was engaged on a non-scheduled international cargo night on behalf of International Aviation Services for Zambian Airlines. It was carrying a through load of palletised freight from London Heathrow to Lusaka International Airport, with...
Read More