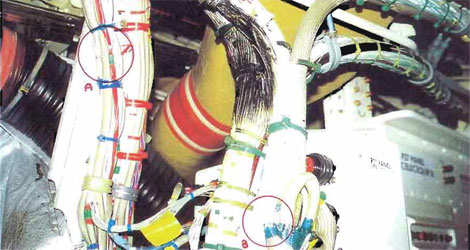 United Airlines flight UA965 was in cruising flight near Paris during an ETOPS flight from Zurich to Washington, DC, abnormal warnings appeared on the flight deck instrumentation and circuit breakers began tripping.

The commander, in consultation with the operator’s maintenance control centre at London Heathrow Airport, decided to divert and land at Heathrow.

The aircraft subsequently landed safely, but during the landing ground roll the right thrust reverser failed to deploy fully and smoke appeared at the forward end of the passenger cabin .

As a result, the commander ordered an evacuation when the aircraft was on the taxiway, adjacent to the landing runway.

During the evacuation, the tight off-wing escape slide failed to deploy and several minor injuries occurred.

A confusion in communication between the aircraft and various Air Traffic Control units resulted in the Heathrow Airport Tower controller being unaware that the aircraft was landing with technical problems until the evacuation was announced , whereupon the emergency services were alerted.

the crew became concerned with the situation and ceased to pull or reset any more circuit breakers.

The tripping of multiple circuit breakers had been caused by the occurrence of electrical arcing and associated thermal damage to a wiling loom adjacent to tbe aft/upper inboard comer of the forward galley chiller unit within the Electronic and Equipment (E&E) bay, with resultant thermal damage to an adjacent loom and smoke generation.

Prior damage to the wiring 100m insulation adjacent the aft/upper comer of the chiller unit had occurred due to contact with such units during associated removal and installation; this chiller unit had been replaced on the day before the accident.

Aluminium alloy swarf was present within the’ E&E bay prior to the accident and had probably assisted the onset of arcing between adjacent damaged wires in the loom.

Incorrect installation of the chiller unit, with. its heat exchanger exhaust fitted with a blanking plate, would have caused warm exhaust air to discharge from an alternative upper vent which was capable of blowing any aluminium swarf around the wiring looms.

The crew were unaware of the potentially serious arcing fire in the E&E bay during the flight due to failure of the bay smoke waming system to activate on the flight deck, because the density of smoke emitted by the arcing wiring in the bay was not apparently sufficient to be detected by the only smoke sensor, which was located in the card and rack cooling system exhaust duct.

The jamming of a severely worn latch, associated with the right off-wing slide compartment, prevented that escape slide from operating during the evacuation; such latches exhibited vibration induced wear on other aircraft.