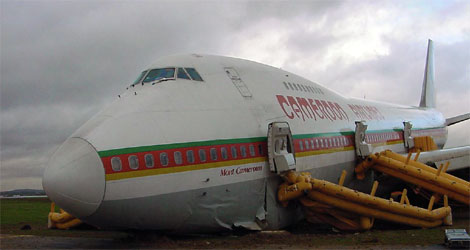 On Sunday 5 November 2000, the Boeing 747-200 registered TJ-CAB operated by Cameroon Airlines was carrying out the scheduled service between Douala and Paris Charles de Gaulle under the operational call sign UYC070. Take-off from Douala took place at 14 h 25 about five hours late. The stopover at Yaoundé was cancelled due to the operational delays accumulated the previous day. The flight crew was made up of the Captain, one Co-pilot and one Flight Engineer.

Cruise was performed at flight level 350. The beginning of the approach was unremarkable. Two female passengers invited by the Captain were present in the cockpit during the last part of the flight and occupied the two jump-seats.

After establishing contact with Paris Charles de Gaulle approach control, the crew prepared for an ILS approach to runway 09L. The final approach was performed at night at an average speed of 160 knots. The values on the landing card were: IRF 140, wind 140 degrees 20 knots.

Since the leading edge slats 3 did not extend pneumatically, the crew extended them electrically. The landing gear was extended, the flaps set at 30° and the speed maintained at 158 knots.

Touch-down occurred at 20 h 57 at a speed of 151 knots. The Captain, pilot flying, moved the thrust reverser levers. During braking, the spoilers did not deploy automatically and the auto-brake system disarmed.

After a landing roll of about 1700 metres, the aircraft veered off laterally to the right. It went onto the central area situated between taxiways Z6 and Z7. While passing over a rainwater collector tank, the nose landing gear was torn off and damaged the airframe at the level of the electronics bay. The aircraft came to a stop on the concrete structure of the collector tank.

When at a stop, the normal cabin lighting went off. The emergency lighting automatically took over. In addition the public address system and radio communications with the tower were no longer operational. The evacuation was carried out calmly.

The initial cause of the accident was the incomplete reduction of thrust on the left outer engine at the beginning of deceleration. This caused the de-activation of the automatic braking systems and the non-extension of the n° 1 thrust reverser. The inadvertent selection of full thrust on this engine after the landing created high thrust asymmetry leading to the runway excursion.

The lack of co-ordination and of joint control by the crew members, perhaps aggravated by the presence of third parties in the cockpit, contributed to the development of this situation.