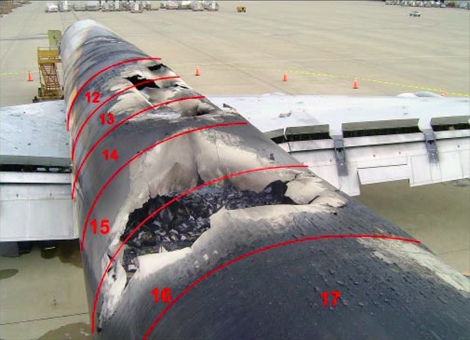 On February 7, 2006, about 2359 eastern standard time, UPS flight UPS1307 (United Parcel Service) , a McDonnell Douglas DC-8-71F (N-748UP) landed at its destination airport, Philadelphia International Airport (PHL), Philadelphia, Pennsylvania, after a cargo smoke indication in the cockpit.
The captain, first officer, and flight engineer evacuated the airplane after landing. The flight crewmembers sustained minor injuries, and the airplane and most of the cargo were destroyed by fire after landing.
Night visual conditions prevailed at the time of the accident.
The accident occurred on the second day of a 5-day, 8-leg trip sequence for the flight crew. The airplane pushed back from the gate at Hartsfield-Jackson Atlanta International Airport (ATL), Atlanta, Georgia, and departed for PHL about 2241.

The first officer was the flying pilot, and the captain performed the duties of the pilot monitoring. The accident flight crew reported that the flight was uneventful until just after beginning the descent to PHL. At 2334:39, while the airplane was descending through flight level 310 about 50 nautical miles southwest of Washington, D.C., the cockpit voice recorder (CVR) recorded the first officer asking the captain and the flight engineer if they detected an odor that smelled “like wood burning.”
The flight engineer replied that he had “smelled it for a couple of seconds.” About 1 minute later, the first officer stated, “[it’s] pretty strong now.” Subsequently, the CVR recorded a sound similar to the cockpit door or seat operating and the flight engineer stating, “[it’s] more in the back.”

During post accident interviews, the captain of UPS flight UPS1307 stated that he considered diverting to another airport soon after the odor was first detected but that he chose to continue to PHL because there was no evidence of a problem, such as the illumination of the cargo smoke warning lights.
The first officer stated that the odor did not appear to be a threat because the flight engineer did not see any visible smoke; therefore, the first officer did not believe that there was any need to divert.
Further, the accident flight crew stated that unusual odors could be common from nonthreatening factors (such as flying over forest fires or unusual cargo). Over the next 4 minutes, the captain and flight engineer tried to identify the source of the odor by conducting several emergency checklist steps, including increasing the bleed air flow and checking the bleed air switches.

As UPS flight UPS1307 was descending through about 18,000 feet and was about 65 miles from PHL, the CVR recorded the flight engineer stating that he set the air conditioning packs to maximum flow and turned off the recirculation fan. Shortly thereafter, the flight engineer and captain conducted the Approach checklist. At 2344:59, the first officer contacted the PHL Terminal Radar Approach Control, and the approach controller instructed the flight to descend to 6,000 feet.

The CVR then recorded the captain asking, “can you still smell it in the back there?” The flight engineer replied, “yeah . . . smells like it was more to the back there.” The first officer then asked, “smells like cardboard burning doesn’t it? you didn’t see smoke though something like that?” The flight engineer again went back to check the main cargo compartment with his flashlight, and he stated that the odor was “definitely stronger in the back” but that there was no smoke or haze.

Over the next 10 minutes, the captain and flight engineer continued to troubleshoot the problem. At 2354:42, as UPS flight UPS1307 was descending through about 3,600 feet, the flight engineer stated, “we got cargo smoke.” The captain replied, “let’s do that checklist if you got time.” The first officer then stated that he would be turning toward the airport. At 2355:01, the PHL approach controller cleared the visual approach to runway 27R and then instructed the flight crew to contact the air traffic control tower (ATCT). Ten seconds later, the captain made initial contact with the ATCT local controller, who cleared the flight to land on runway 27R. After acknowledging the clearance, the captain reported that the cargo smoke indicator had illuminated and requested that emergency response equipment meet them upon landing. The local controller immediately activated the crash phone and advised approach control of the emergency.

At 2356:12, the local controller cleared the flight to land on runway 27L, and the captain acknowledged the landing clearance but not the change in landing runway. The flight engineer continued the Lower and/or Main Cargo Compartment Smoke or Fire checklist items. When he reached the step to close the cargo air shutoff valve, he stated that he had to “go in the back and do that.” During post accident interviews, the flight engineer stated that, when he opened the door of the access panel to the cargo air shutoff valve, black smoke billowed out of the access panel.
At 2357:47, the first officer called for the Landing checklist. About 21 seconds later, the ATCT local controller stated, “just confirmed you are lined up for the left side it appears that you are lined up for the right.” The first officer replied, “I thought we were cleared for the right . . . are we cleared to land on the right?”
At 2358:16, the local controller replied, “you are cleared to land on the right we will just tell fire.”

UPS flight UPS1307 landed on runway 27R about 2359. Immediately after touchdown, the flight engineer reported smoke in the cockpit. After the airplane came to a stop, the first officer called for an emergency evacuation, and the captain and first officer conducted the Emergency Evacuation checklist. All of the flight crewmembers successfully evacuated the airplane using the emergency slide located at the left forward (L1) door.

The National Transportation Safety Board determines that the probable cause of this accident was an in-flight cargo fire that initiated from an unknown source, which was most likely located within cargo container 12, 13, or 14.
Contributing to the loss of the aircraft were the inadequate certification test requirements for smoke and fire detection systems and the lack of an on-board fire suppression system.