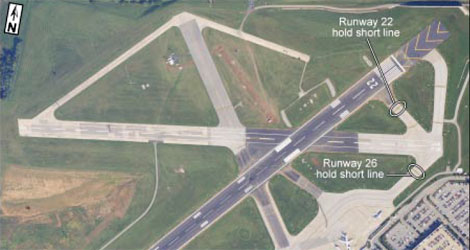 COMAIR flight DL5191 , on August 27, 2006, about 0606:35 eastern daylight time, a Bombardier CL-600-2B19, N431CA, crashed during takeoff from Blue Grass Airport, Lexington, Kentucky. The flight crew was instructed to take off from runway 22 but instead lined up the airplane on runway 26 and began the takeoff roll.

The airplane ran off the end of the runway and impacted the airport perimeter fence, trees, and terrain. The captain, flight attendant, and 47 passengers were killed, and the first officer received serious injuries. The airplane was destroyed by impact forces and postcrash fire. The flight was operating under the provisions of 14 Code of Federal Regulations Part 121 and was en route to Hartsfield-Jackson Atlanta International Airport, Atlanta, Georgia. Night visual meteorological conditions prevailed at the time of the accident.

The controller did not detect the Comair flight DL5191 attempt to take off on the wrong runway because, instead of monitoring the airplane’s departure, he performed a lower-priority administrative task that could have waited until he transferred responsibility for the airplane to the next air traffic control facility.

The National Transportation Safety Board determines that the probable cause of this accident was the flight crewmembers’ failure to use available cues and aids to identify the airplane’s location on the airport surface during taxi and their failure to cross‑check and verify that the airplane was on the correct runway before takeoff. Contributing to the accident were the flight crew’s nonpertinent conversation during taxi, which resulted in a loss of positional awareness, and the Federal Aviation Administration’s failure to require that all runway crossings be authorized only by specific air traffic control clearances.