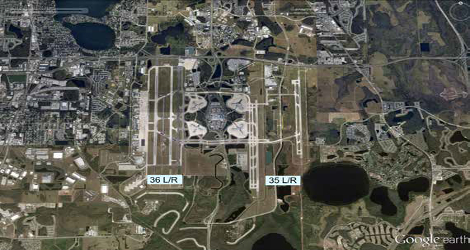 The Virgin Atlantic flight VS76 was on a scheduled fight from Orlando Airport, USA to Manchester International Airport, UK. The fight crew comprised three pilots: the aircraft commander and two Senior First Officers. All three pilots were present on the fight deck for the departure.

The Virgin Atlantic flight VS76 crew carried out the normal pre fight inspection of the aircraft and the cockpit checks. The departure was to be at night, from Runway 35L in benign weather conditions; visibility was reported as being 10 km with a few clouds at 3,600 ft.

The crew briefed the actions to be taken in the event of an abandoned or continued takeoff as well as the procedure to be followed for an overweight landing. With all the required checks and briefings completed, the aircraft lined up on the runway and commenced the takeoff roll using a flexible takeoff thrust temperature of 46°C.

After takeoff, the landing gear was retracted and the aircraft commenced its climb.

At a height of 530 ft, Virgin Atlantic flight VS76 suffered multiple bird strikes.

There was a loud bang as a bird struck the nose of the aircraft which caused the crew some alarm and this was followed almost immediately by an Electronic Centralized Aircraft Monitoring (ECAM) message indicating a malfunction of the left engine. The crew engaged the autopilots in heading mode and, in line with their departure clearance, selected a heading of 060°.

In accordance with established Crew Resource Management principles, the co pilot continued to fly the aircraft and the commander analysed the problem with the assistance of the third pilot. There was a significant vibration which was felt through the airframe; indications showed that this was from the left engine.

The ENG 1 OIL LO PR (engine one low oil pressure) caption was displayed on the ECAM and the pressure was indicating zero. Following standard operating procedures, this indication required the crew to select idle thrust on the left engine and, because the warning persisted, then select the engine master control to the OFF position and carry out the ‘ENGINE SHUT DOWN PROCEDURE’.

This was performed by the commander and monitored by the other pilots. The commander informed the tower of the situation with a radio call of “PAN STANDBY CLIMBING RUNWAY HEADING.”

On initial contact with Radar, the commander of Virgin Atlantic flight VS76 prefixed their callsign with “MAYDAY” and he requested a return to the airport. There was already a high volume of RT on the frequency and ATC attempted to assist the crew by keeping the aircraft close to the airport and minimising any manoeuvring. The aircraft levelled at 3,000 ft.

The crew of Virgin Atlantic flight VS76 reviewed the situation and, having confirmed that all the ECAM actions had been completed, the Flight Service Manager (FSM) was called to the fight deck and given a NITS briefing. Having briefed the FSM, the commander used the public address system to inform and reassure the passengers. He then downgraded the Mayday to a “PAN” and took control as PF. The crew calculated the landing distance required for an overweight, single-engine landing and ATC offered radar vectors for an ILS approach to Runway 36R but a single orbit was required to allow the crew additional time to complete the pre landing checks.

The commander confirmed with the other two pilots that all actions had been completed and the aircraft then made the approach to land. Following the uneventful landing the aircraft taxied clear of the runway where the airport Rescue and Fire Fighting Service (RFFS) inspected the aircraft. The crew of Virgin Atlantic flight VS76 had intended to taxi to the parking stand but, as the brakes were hot, a tug was used instead. The passengers and cabin crew were kept informed of the situation throughout and, once on stand, the aircraft was shut down and the passengers disembarked normally. The total fight time was 30 minutes.

The aircraft was equipped with a 25-hour duration Flight Data Recorder (FDR), a 120 minute Cockpit Voice Recorder (CVR) and a Digital ACMS Recorder (DAR). A record of the entire incident fight was available from the recorders. Salient parameters from the FDR and DAR included the engine low oil pressure warning from the Flight Warning Computer (FWC), engine untrim oil pressure from the Engine Interface and Vibration Monitoring Unit (EIVMU) and engine N1 shaft vibration for each engine.

The PF increased the right engine thrust to the TOGA position, before the shutdown procedure for the left engine was completed. The total time from initial warning to shutdown was 1 minute 46 seconds.