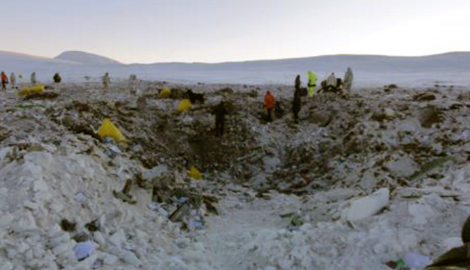 West Air Sweden flight SWN294 crashed on 8 January 2016 during a commercial cargo flight from Oslo/Gardermoen Airport (ENGM) to Tromsø/Langnes Airport (ENTC) and involved an aeroplane of the model CL-600-2B19, manufactured by Bombardier Inc.

The aeroplane was operated by West Atlantic Sweden AB and had the registration SE-DUX.

West Air Sweden flight SWN294 was uneventful until the start of the event, which occurred during the approach briefing in level flight at FL 330.

The event started at 00:19:20 hrs during darkness without moonlight, clouds or turbulence. 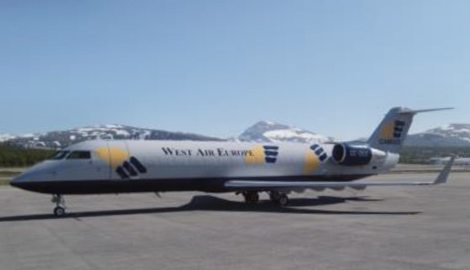 The lack of external visual references meant that the pilots were totally dependent on their instruments which, inter alia consisted of three independent attitude indicators.

According to recorded data and simulations a very fast increase in pitch was displayed on the left attitude indicator.

The autopilot was, most probably, disconnected automatically, a “cavalry charge” aural warning and a single chime was heard, the latter most likely as a result of miscompare between the left and right pilots’ flying displays (PFD).

Both elevators moved towards nose down and nose down stabilizer trim was gradually activated from the left control wheel trim switch.

Both pilots exclaimed strong expressions and the co-pilot said “come up”. About 13 seconds after the start of the event the crew were presented with two contradictory attitude indicators with red chevrons pointing in opposite directions.

At the same time none of the instruments displayed any comparator caution due to the PFDs declutter function in unusual attitude.

Bank angle warnings were heard and the maximum operating speed and Mach number were exceeded 17 seconds after the start of the event, which activated the overspeed warning.

The speed of West Air Sweden flight SWN294 continued to increase, a distress call was transmitted and acknowledged by the air traffic control and the engine thrust was reduced to flight idle.

The crew of West Air Sweden flight SWN294 was active during the entire event.

The dialogue between the pilots consisted mainly of different perceptions regarding turn directions. They also expressed the need to climb. At this stage, the pilots were probably subjected to spatial disorientation.

West Air Sweden flight SWN294 collided with the ground one minute and twenty seconds after the initial height loss.

The two pilots were fatally injured and the aeroplane was destroyed.

Calculations and simulations were performed to reconstruct the event and showed that the aeroplane’s flight control system operated normally.

The erroneous attitude indication on PFD 1 was caused by a malfunction of the Inertial Reference Unit (IRU 1).

The pitch and roll comparator indications of the PFDs were removed when the attitude indicators displayed unusual attitudes.

In the simulator, in which the crew had trained, the corresponding indications were not removed.

During West Air Sweden flight SWN294 the pilots initially became communicatively isolated from each other.

The current flight operational system lacked essential elements which are necessary. In this occurrence a system for efficient communication was not in place.

SHK considers that a general system of initial standard calls for the handling of abnormal and emergency procedures and also for unusual and unexpected situations should be incorporated in commercial aviation.

The accident was caused by insufficient operational prerequisites for the management of a failure in a redundant system.