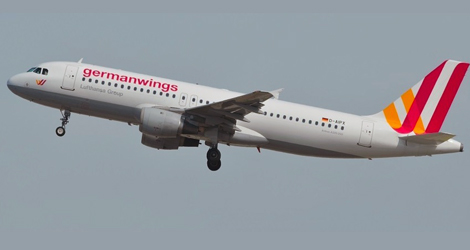 On Tuesday 24 March 2015, the Airbus A320-211 registered D-AIPX operated by Germanwings was programmed to undertake scheduled flight 4U9525 between Barcelona (Spain) and Düsseldorf (Germany), with the callsign ‘‘GWI18G’’.

Six crew members (2 flight crew and 4 cabin crew) and 144 passengers were on board.

The same crew had made the outbound flight, taking off from Düsseldorf at 6 h 01, and landing in Barcelona at 7 h 57.
The takeoff from Barcelona took place at 9 h 00 from runway 07R.
The co-pilot ( sadly famous know Andreas Lubitz ) was Pilot Flying (PF). At 9 h 02 min 54, autopilot n°2 was engaged in ‘‘CLIMB’’ and ‘‘NAV’’ mode; autothrust had been engaged about a minute earlier.

At 9 h 12 min 15, during the climb, the buzzer to request access to the cockpit sounded for one second.
Noises similar to the cockpit door opening and then closing were recorded, following which a flight attendant was present in the cockpit. The three crew members then started a conversation about how the stop at Barcelona had gone.

At 9 h 15 min 53, noises like those of the opening then the closing of the cockpit door were recorded. The flight attendant left the cockpit. Following that, some discussions took place between the co-pilot and the Captain about managing the delay that resulted from late departure from Barcelona.

At 9 h 27 min 20, the aeroplane levelled off at a cruise altitude of 38,000 ft (FL380). The flight crew of Germanwings flight 4U9525 was then in contact with the Marseille en-route control centre on the 133.330 MHz frequency. At 9 h 29 min 40, the flight crew was transferred to the 127.180 MHz frequency of the Marseille control centre. At 9 h 30 min , the Captain read back the controller’s clearance allowing him to fly direct to the IRMAR point: ‘‘Direct IRMAR Merci Germanwings one eight Golf’’.

This was the last communication between the flight crew and ATC.

At 9 h 30 min 08, the Captain of Germanwings flight 4U9525 told the co-pilot that he was leaving the cockpit and asked him to take over radio communications, which the co-pilot read back.

At 9 h 30 min 11, the heading started to decrease and stabilised about a minute later around 23°, which is consistent with a route towards the IRMAR point. At 9 h 30 min 13, noises of a pilot’s seat movements were recorded.

At 9 h 30 min 24,  noises of the opening then, three seconds later, the closing of the cockpit door were recorded.

The Captain of Germanwings flight 4U9525 was then out of the cockpit.

The aeroplane started to descend and both engines’ rpm decreased. At 9 h 31 min 37, noises of a pilot’s seat movements were recorded.

At 9 h 33 min 12 , the speed management changed from ‘‘managed’’ mode to ‘‘selected’’ mode. A second later, the selected target speed became 308 kt while the aeroplane’s speed was 273 kt. The aeroplane’s speed started to increase along with the aeroplane’s descent rate, which subsequently varied between 1,700 ft/min and 5,000 ft/min, then was on average about 3,500 ft/min.

Then, over the following 13 seconds, the value of this target speed changed six times until it reached 302 kt.

At 9 h 33 min 47 , the controller asked the flight crew what cruise level they were cleared for. The aeroplane was then at an altitude of 30,000 ft in descent. There was no answer from the co-pilot.

Over the following 30 seconds, the controller tried to contact the Germanwings flight 4U9525 again on two occasions, without any answer.

At 9 h 34 min 23, the selected speed increased up to 323 kt.
The aeroplane’s speed was then 301 kt and started to increase towards the new target.

At 9 h 34 min 31 , the buzzer to request access to the cockpit was recorded for one second.

Subsequently, and until the end of the recording: the selected speed remained at 350 kt and the aeroplane’s speed stabilised around 345 kt; the autopilot and autothrust remained engaged; the cockpit call signal from the cabin, known as the cabin call, from the cabin interphone, was recorded on four occasions between 9 h 35 min 04 and 9 h 39 min 27 for about three seconds; noises similar to a person knocking on the cockpit door were recorded on six occasions between 9 h 35 min 32  and 9 h 39 min 02; muffled voices were heard several times between 9 h 37 min 11 and 9 h 40 min 48, and at 9 h 37 min 13 a muffled voice asks for the door to be opened;

At 9 h 40 min 41 , the ‘‘Terrain, Terrain, Pull Up, Pull Up’’ aural warning from the GPWS triggered and remained active until the end of the flight.

At 9 h 40 min 56, the Master Caution warning was recorded, then at 9 h 41 min 00 the Master Warning triggered and remained active until the end of the flight.

At 9 h 41 min 06, the CVR recording stopped at the moment of the collision with the terrain.

The collision with the ground was due to the deliberate and planned action of the co-pilot who decided to commit suicide while alone in the cockpit. The process for medical certification of pilots, in particular self-reporting in case of decrease in medical fitness between two periodic medical evaluations, did not succeed in preventing the co-pilot, who was experiencing mental disorder with psychotic symptoms, from exercising the privilege of his licence.

The following factors may have contributed to the failure of this principle: 