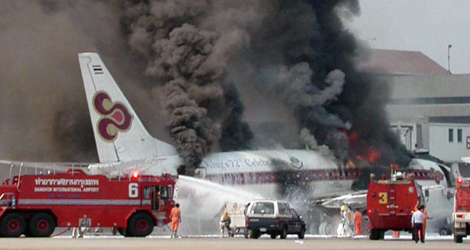 Thai Airways flight TG114 exploded about 14:48 while parked at gate 62 of the Bangkok International Airport, Thailand.

Immediately after the explosion, witnesses reported smoke in the center cabin and a fire underneath the Center Wing Tank (CWT) area.

Photographs taken shortly after the explosion show a large fire beneath the airplane CWT and black and tan smoke coming from the left side forward and aft passenger doors .

The accident airplane’s Auxiliary Power Unit (APU) was running continuously during ground operations to power the air conditioning system and to provide electrical power for the airplane.

All ground operations were routine except that both CWT pump switches were found in the “ON” position. The left and right wing fuel tanks were refueled with approximately 5,440 kilograms (kg) of fuel, resulting in a total fuel quantity of 8,580 kg onboard the airplane at the time of the accident. No fuel was added to the center wing tank, and only residual fuel remained.

Some of the findings of the investigation :

The AAIC determines that the probable cause of this accident was an explosion of the CWT resulting from ignition of the flammable fuel/air mixture in the tank. The source of ignition energy for the explosion could not be determined with certainty, but the most likely source was an explosion originating at the CWT pump as a result of running the pump in the presence of metal shavings and a fuel/air mixture.