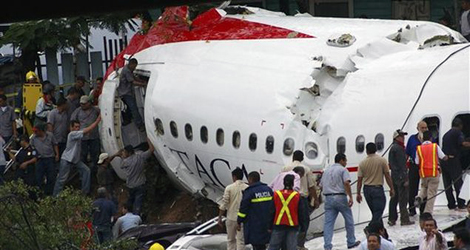 TACA flight TA390 ,was operated with an Airbus A320-233 with Irish Registry EI-TAF, with 135 passengers and crew on board, overran at the end of the runway during landing at Tegucigalpa caused the deaths of three people on board and two on the ground.

It is confirmed that the aircraft was dispatched without any deferred MEL item.

Prior to landing, the wind information given by the ATC to the crew was 190°/10kt and ATC also confirmed that the runway was wet.

TACA flight TA390 was cleared to land on runway 02 and landed with Autopilot and Flight Directors OFF, and autothrust engaged in managed speed mode.

At time of touch down, IAS was 139kt and Ground Speed (GS) was 159kt (estimated tailwind was 12kt from DFDR data analysis).

The touch down occurred at approximately 400m from the runway 02 displaced threshold. Immediately after touch down, the crew selected MAX REV, and both engine reversers and the Ground Spoilers (G/S) deployed normally. The nosewheel touch down occurred 7s after the Main Landing Gear (MLG) following PF inputs.

The remaining distance to the runway end was approximately 190m.

TACA flight TA390 overran the runway at 54kt and dropped down the 20 m embankment sustaining severe damage on impact with the ground.