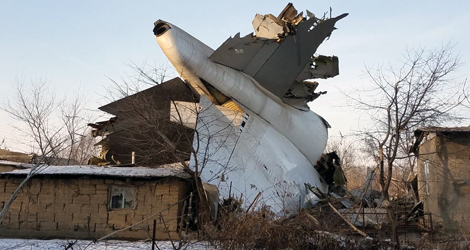 Manas Airport was planned as a transit airport for refueling and crew change.

The approach was conducted to RWY 26. The a/c overflown the entire length of the runway and impacted the ground near RWY 08 LMM.

The a/c was totally destroyed in the accident : the 4 persons on board ACT Airlines flight TK6491 were killed.

The Descent was performed at approximately 160 kt CAS.

The landing weight was about 274800 kg. MAP mode was selected on both pilots’ navigation displays with scale range of 10 nm. As the a/c was descending LAND 3 status degraded to LAND 2, which was confirmed by the crew callout.

At 01:17:08 the PIC of ACT Airlines flight TK6491 informed that there was no visual contact («NEGATIVE») and called to go-around.

At 01:17:09 A/P Flare mode was engaged and half a second later at 58 ft radar altitude TOGA switch was pushed as per the DFDR.

3.5 seconds after the TOGA switch had been pushed the a/c hit slightly upsloping terrain and obstacles. The ground speed at the time of impact was 165 kt. The maximum recorded vertical acceleration was 6 g. Initial impact occurred at a distance of approximately 930 m from RWY 26 departure end.

The collision with terrain and obstacles resulted in hull loss, most of the a/c structure was consumed by the post-crash fire.