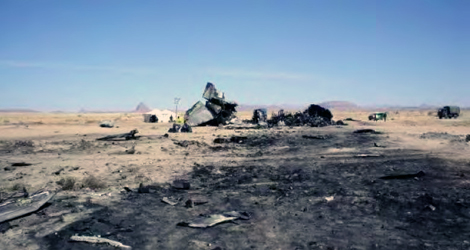 On Thursday 6 March 2003, the Boeing 737 registered 7T-VEZ, operated by Air Algérie, was taking off from Tamanrasset to undertake, with a three-hour delay, scheduled flight DAH 6289 to Ghardaïa and Algiers.

Six crew members (two flight crew and four cabin crew) and 97 passengers were on board.

The co-pilot was pilot flying.

No technical exemptions or deferred maintenance items applied to the airplane; on departure from Algiers it had been subject to routine maintenance for a minor technical problem, a hydraulic pump having been changed in the circuit B landing gear bay.

About five seconds after airplane rotation, at the moment when gear retraction was requested, a sharp thumping noise was recorded on the CVR. The airplane’s heading veered to the left, followed by a track correction.

The Captain of Air Algerie flight AH6289 announced he was taking over the controls about eight seconds after the engine failure. […] The rate of climb was maintained, the airplane’s speed dropped progressively until it reached stall speed.

The Captain announced that he was taking over the controls. A short time later, the co-pilot told the control tower “we have a small problem”. The airplane continued to climb and reached a recorded height of about 400 ft.

The speed dropped progressively from 160 kt during airplane lift-off to stall speed at the end of the recording.
In fact, about ten seconds before, the noise of the stick shaker is heard on the CVR (which usually indicates that the airplane is 7% from its stall speed). The “Don’t Sink” aural warning, which normally indicates a loss of altitude during take-off when the airplane is below nine hundred feet, appeared about six seconds before the end of the recording.

The airplane, with landing gear extended, struck the ground on its right side. A severe fire broke out immediately. The airplane slid along, losing various parts, struck and knocked over the airport perimeter fence then crossed a road before coming to a halt in flames.

The accident was caused by the loss of an engine during a critical phase of flight, the non-retraction of the landing gear after the engine failure, and the Captain, the PNF, taking over control of the airplane before having clearly identified the problem.

The following factors probably contributed to the accident: