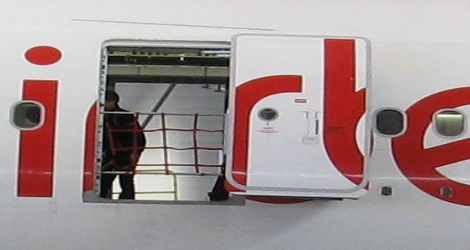 Shortly after take-off of Air Berlin flight AB2050 the cabin crew member sitting next to door R2 heard a bang.

The cabin crew members sprayed Halon from a fire extinguisher onto the lamp and behind the door panel through existing openings. Afterwards no open flames could be determined. There was still smoke coming from the door panel, however.

After the cockpit crew had been informed they declared emergency and returned to the aerodrome of departure. The airplane landed there safely after a total of 13 minutes flight time.

Due to the climatic conditions in the door area condensation developed. Furthermore, whenever the door was open water could penetrate from the outside.

The water reached the power unit.

In combination with the water the insulation resistance of the circuit board was reduced and resulted in a short circuit. The energy set free by the short circuit resulted in fire. The fire was noticed by the cabin crew which immediately initiated appropriate actions.

The fire was confined.

The BFU is of the opinion that to date the measures initiated by the manufacturer in the function as design organisation to remedy the known deficiency were insufficient to prevent in-flight fire.