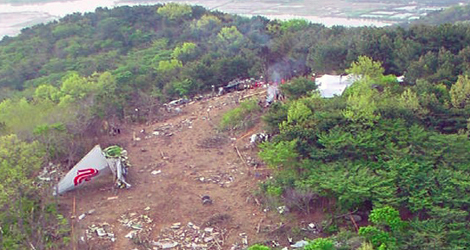 On April 15, 2002, about 11:21:17 (02:21:17 UTC), Air China flight CCA129, a Boeing 767-200ER, Chinese registration B2552, operated by Air China, en route from Beijing, China to Busan, Korea, crashed on Mt. Dotdae, located 4.6 km north of runway 18R threshold at Gimhae airport (Busan) , at an elevation of 204 meters Mean Sea Level (MSL). Air China flight CCA129 departed from Beijing airport, China, with one captain, two copilots, eight flight attendants and 155 passengers on board, and was conducting the circling approach to runway 18R at Gimhae airport, after it received its landing clearance. Of the 166 persons on board Air China flight CCA129 , 37 persons including the captain and two flight attendants survived, while 129 occupants including two copilots were killed.

The aircraft was completely destroyed by impact forces and a postcrash fire. Of the 166 persons on board, 37 persons including the captain and two flight attendants survived, while the remaining 129 occupants including two copilots were killed.