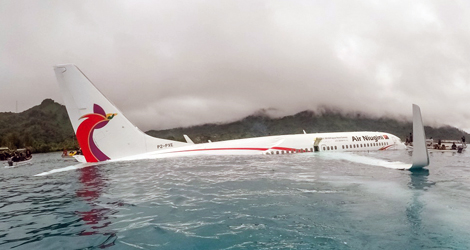 It was operated with a Boeing 737-8BK aircraft, registered P2-PXE (PXE), operated by Air Niugini Limited, on a scheduled passenger flight number PX073, from Pohnpei to Chuuk, in the Federated States of Micronesia (FSM).

The aircraft deflected across the water several times before it settled in the water and turned clockwise through 210 deg and drifted 460 ft (140 m) south east of the runway 04 extended centreline, with the nose of the aircraft pointing about 265 deg.

The pilot in command (PIC) was the pilot flying, and the copilot was the support/monitoring pilot.

An Aircraft Maintenance Engineer occupied the cockpit jump seat. The engineer videoed the final approach on his iPhone, which predominantly showed the cockpit instruments.

The US Navy divers rescued six passengers and four cabin crew and the Load Master from the right aft over-wing exit. All injured passengers were evacuated from the left over-wing exits. One passenger was fatally injured, and local divers located his body in the aircraft three days after the accident.
The Government of the Federated States of Micronesia commenced the investigation and on 14th February 2019 delegated the whole of the investigation to the PNG Accident Investigation Commission.
The investigation determined that the flight crew’s level of compliance with Air Niugini Standard Operating Procedures Manual (SOPM) was not at a standard that would promote safe aircraft operations.

The RNAV approach specified a flight path descent angle guide of 3º.
The aircraft was flown at a high rate of descent and a steep variable flight path angle averaging 4.5º during the approach, with lateral over-controlling; the approach was unstabilised.

A “100 ft” advisory was annunciated, in accordance with design standards, overriding one of the “Glideslope” aural alert.

The other aural alerts were seven “Glideslope” and six “Sink Rate”.
The investigation observed that the flight crew of Air Niugini flight PX073 disregarded the alerts, and did not acknowledge the “minimums” and 100 ft alerts; a symptom of fixation and channelised attention. 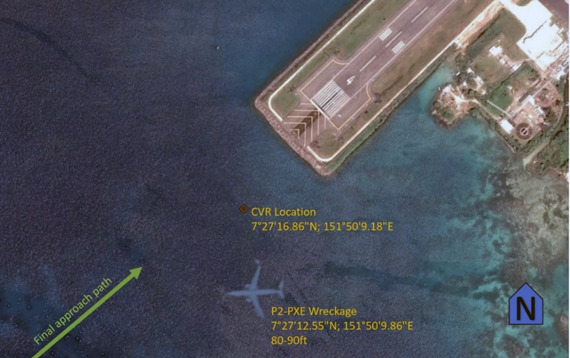 The crew were fixated on cues associated with the landing and control inputs due to the extension of 40° flap.
Both pilots of Air Niugini flight PX073 were not situationally aware and did not recognise the developing significant unsafe condition during the approach after passing the Missed Approach Point (MAP) when the aircraft entered a storm cell and heavy rain. The weather radar on the PIC’s Navigation Display showed a large red area indicating a storm cell immediately after the MAP, between the MAP and the runway.

The copilot as the support/monitoring pilot was ineffective and was oblivious to the rapidly unfolding unsafe situation. He did not recognise the significant unsafe condition and therefore did not realise the need to challenge the PIC and take control of the aircraft, as required by the Air Niugini SOPM6.
The Air Niugini SOPM instructs a non-flying pilot to take control of the aircraft from the flying pilot, and restore a safe flight condition, when an unsafe condition continues to be uncorrected.
The records showed that the copilot had been checked in the Simulator for EGPWS Alert (Terrain) however there was no evidence of simulator check sessions covering the vital actions and responses required to retrieve a perceived or real situation that might compromise the safe operation of the aircraft. Specifically sustained unstabilised approach below 1,000 ft amsl in IMC.

The PIC of Air Niugini flight PX073 did not conduct the missed approach at the MAP despite the criteria required for visually continuing the approach not being met, including visually acquiring the runway or the PAPI.

The PIC did not conduct a go around after passing the MAP and subsequently the MDA although:
• The aircraft had entered IMC;
• the approach was unstable;
• the glideslope indicator on the Primary Flight Display (PFD) was showing a rapid glideslope deviation from a half-dot low to 2-dots high within 9 seconds after passing the MDA;
• the rate of descent high (more than 1,000 ft/min) and increasing;
• there were EGPWS Sink Rate and Glideslope aural alerts; and
• the EGPWS visual PULL UP warning message was displayed on the PFD.

It also highlights that crew coordination is less than effective if crew members do not work together as an integrated team. Support crew members have a duty and responsibility to ensure that the safety of a flight is not compromised by non-compliance with SOPs, standard phraseology and recommended practices.