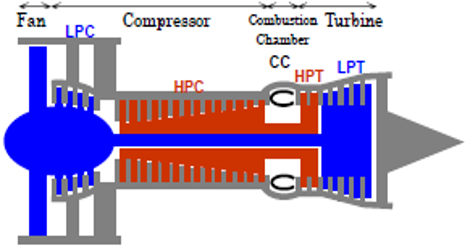 All Nippon Airways flight NH883 was a flight operated with a Boeing 767-300, registered JA8674, that took off from Tokyo International Airport for Toyama Airport as a scheduled Flight NH883 at 09:08 JST (UTC+9 hours).

At 09:19 while flying at an altitude of approximately 8,500 ft, a loud noise accompanied by vibration was heard from No.1 Engine (the left engine; hereinafter referred to as “the Engine”); therefore, the flight crew they shut it down and returned to Tokyo International Airport.

The Aircraft made an uneventful landing at the airport at 09:51 after obtaining a priority in the air traffic control.

Cause of the Fracture of Blades :

1) Identification of the blade that fractured first Judging from the fact that the Blade had the least amount of the remaining part and the existence of fatigue propagation cracks, it is highly probable that the Blade was the first one to separate.

2) Cause of the Blade Fracture : it is probable that as the shank wall was thinner than the minimum design value, fatigue caused by the stress during the engine operation generated cracks and they propagated leading to the fracture of the Blade.

Cause of the Thinner Shank Wall with the reasons listed below, it is possible that the thinning of the shank below the minimum design value was caused by excessive Blasting during the repair work at the repair facility:

It is highly probable that this serious incident of All Nippon Airways flight NH883 was caused by the separation of a second stage HPT blade via fatigue mechanisms during service, followed by the liberated blade fragment in the shank (post-separation) resulted in secondary downstream impact damage for entire axial length of the LTP.

The possible contributing factor to the fatigue propagation was increase in stress because of the reduction in wall thickness caused by excessive grit blasting during the last repair.

Finnair flight AY58 incident occurred from from Shanghai, China to Helsinki- Vantaa Airport, Finland on 22 June 2009. The aircraft was an Airbus A340-313, registration OHLQE. There were 195 passengers and 12 crew members on board. The inner rear tyre on the left...
Read More