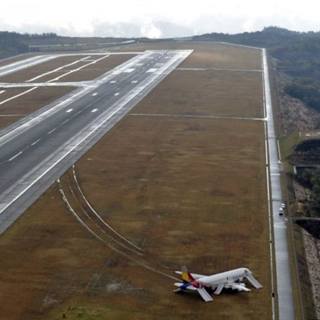 Asiana Airlines flight OZ162 was operated on Tuesday, April 14, 2015, with Airbus A320-200, registered HL7762.
The flight approached lower than the prescribed approach path during approach to Hiroshima airport.

Subsequently Asiana Airlines flight OZ162 moved forward on the runway, and then deviated to the south side of the runway and came to a stop inside the runway strip of the airport.
There were 81 people on board, consisting of the Pilot-in-Command (PIC), six other crew members, a boarding mechanic and 73 passengers.
Among them, 26 passengers and two crew members, 28 people in total, were slightly injured.

The aircraft was substantially damaged, but there was no fire breakout.

It is certain that when landing on runway 28 at Hiroshima airport, Asiana Airlines flight OZ162 undershot and the PIC commenced executing a go-around; however, it collided with the Aeronautical Radio Navigation Aids located in front of runway 28 threshold, just before turning to climb.

Regarding the fact that the aircraft undershot, it is probable that there might be following aspects in causes: