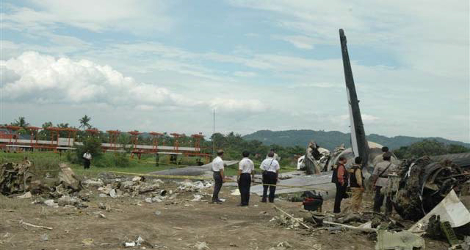 On 7 March 2007, Garuda Indonesia flight GA200, a Boeing B737-497 registered PK-GZC , was being operated by Garuda Indonesia on an instrument flight rules (IFR), scheduled passenger service, from Soekarno-Hatta Airport, Jakarta to Adi Sucipto Airport, Yogyakarta. There were two pilots, five flight attendants, and 133 passengers on board.

The pilot in command (PIC) and copilot commenced duty in Jakarta at about 21:30 Coordinated Universal Time (UTC), or 04:30 local time, for the flight to Yogyakarta.
Prior to departing Jakarta, during the push back, the PIC contacted the ground engineers and informed them that the number 1 (left) engine thrust reverser fault light on the cockpit instruments had illuminated.
The engineers reset the thrust reverser in the engine accessories unit and the fault light extinguished.

The scheduled departure time of Garuda Indonesia flight GA200 was 23:00. The aircraft took off from Jakarta at 23:17, and the PIC was the pilot flying for the sector to Yogyakarta. The copilot was the monitoring/support pilot.

During the cruise, just before top of descent, the crew was instructed by Jakarta Control to ‘maintain level 270 and contact Yogya Approach . The copilot acknowledged.

The PIC started to give a crew briefing at 23:43 stating: ‘in case of holding, heading of 096’. The briefing was interrupted by a radio transmission from Yogya Approach, giving GA200 a clearance to Yogyakarta via airway W 17 for runway 09, and a requirement to report when leaving flight level 270.

When radio communication was completed, the PIC continued with the crew briefing for an ILS approach, stating:

The crew informed the investigation that they were conducting an Instrument Landing System (ILS) approach to runway 09 , in visual meteorological conditions (VMC). However they did not inform Yogya Approach or Yogyakarta Tower that they were flying the 09 ILS approach.

At 23:58:10, Garuda Indonesia flight GA200 overran the departure end of runway 09 at Yogyakarta Airport. The PIC reported that as the aircraft was about to leave the runway, he shut down both engines.

The aircraft crossed a road, and impacted an embankment before stopping in a rice paddy field 252 meters from the threshold of runway 27 (departure end of runway 09).
The aircraft was destroyed by the impact forces and an intense, fuel-fed, post-impact fire.

The SSFDR data shows that the aircraft crossed the threshold, 89 feet above the runway, at an airspeed of 232 knots, 98 knots faster than the required landing speed for flaps 40 degrees.

The wind was north easterly at 9 knots. The groundspeed was 235 knots. The aircraft touched down at an airspeed of 221 knots, 87 knots faster than landing speed for 40 degrees flap (134 knots) at the aircraft’s landing weight of 53,366 kilograms.

Shortly after touching down, the copilot of Garuda Indonesia flight GA200 called, with high intonation, for the PIC to go around.

About 160 meters from the end of runway 09, the aircraft crossed a road and the nose of the aircraft impacted an embankment as the engines impacted a concrete gutter.