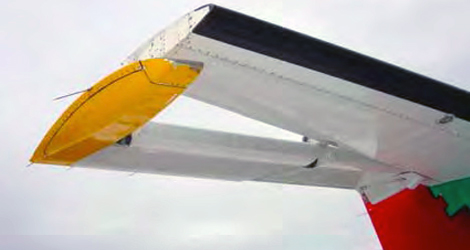 Danish Air Transport flight DTR54, an aircraft of type ATR 42 with registration mark OY-JRJ was on a scheduled flight from Bergen Airport Flesland (ENBR) to Florø Airport (ENFL). There were 22 passengers, 1 cabin crew member and 2 pilots on board.

During take-off the pilots experienced considerable control problems related to the elevator function. They declared an emergency situation and returned for landing. The landing was accomplished without further incident 7 minutes after take-off.

After landing it was found that the control problems were caused by the right elevator hanging below the horizontal stabiliser, attached only by the inboard of the three hinges that normally connect the elevator to the stabiliser.

A bolt was missing from both the centre and outer hinges.

Both of the bolts and one of the nuts that normally should connect the hinge assemblies together were found. One of the bolts was found on the runway, the other inside the elevator.

Investigation indicates that the bolt belonging to the outer hinge assembly fell out during the take-off in question, while the bolt in the centre hinge assembly had fallen out at an earlier point in time, without being discovered.

The report concludes that the self-locking nuts cannot have been tightened with the required torque when the elevator was fitted. This error was most probably introduced after the aircraft was repainted in 1999.