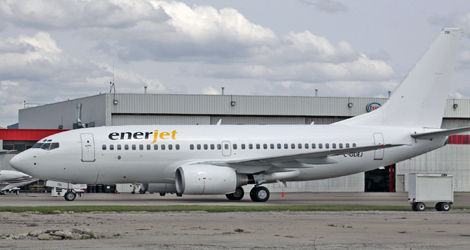 Enerjet flight ENJ401 was operated with a Boeing B737-700 (registration C-GDEJ, serial number 32427) from Fort St. John to Fort Nelson, British Columbia. At 1117 Mountain Standard Time, during the landing rollout on Runway 03, Enerjet flight ENJ401 overran the runway end by about 230 feet.

There were no injuries to the 112 passengers or 6 crew members and no damage to the aircraft.

At this time the flight directors were cycled off and then on. Turning off the flight directors switches results in the pitch and roll command bars to disappear on the primary flight display and the AFDS modes currently selected to be turned off, in this case, G/S capture and VOR/LOC respectively.

Turning the flight director back on results in the pitch bars returning and defaulting to a selected altitude, in this case ALT ACQ and 1900 feet, and the roll bar to the current heading.

The AFDS remained in ALT ACQ with no lateral mode and the A/T was in MCP SPD mode. The aircraft was experiencing a tailwind component of 10 knots, which was decreasing.

The EGPWS radar altitude countdown sounded “… 50, 40, 30, 20, 10” but the captain did not disarm the A/T at 50 feet agl in accordance with standard operating procedures. The aircraft touched down at 134 KIAS, 1800 feet from the threshold with 4602 feet remaining. When the captain moved his hand to actuate the thrust reversers, the A/T advanced the thrust levers in order to maintain the selected speed of 133 knots.

This action prevented the extension of the speed brakes. The captain repositioned his hand on the thrust levers and brought them to flight idle while disconnecting the A/T.

Contrary to Enerjet standard operating procedures, the first officer did not call out “no speedbrake”, “no reverse”, or “autobrake disarm” during the initial roll-out.

Enerjet flight ENJ401 was flown on short final at 140 KIAS, or Vref +12. The extra speed carried over the threshold resulted in a longer flare and touchdown 800 feet beyond the 1000-feet touchdown point recommended in the Boeing landing distance chart.

Deceleration began about 5 seconds after touchdown with approximately 2500 feet of runway remaining. At this time full manual braking was being applied with reverse thrust and speed brakes deployed. The longitudinal deceleration force averaged -0.35 g which is consistent with a bare and dry runway .

The aircraft exited the end of the runway at approximately 10 to 15 knots and came to a full stop 230 feet from the end and approximately 20 feet left (north) of the extended runway centre line. The main landing gear was on frozen soil and the nose gear was in approximately 18 inches of snow. The aircraft engines remained running for approximately 70 seconds as the flight crew determined the level of damage and possible injuries. The engines were shut down and the shutdown checklist was completed.

1. The captain did not attain appreciable sleep in the 24 hours preceding the flight and was fatigued, likely resulting in attention decrements.

2. The captain continued the approach when the aircraft was not in a stabilized configuration, consistent with fatigue-induced reduction in forward planning and a focus of attention towards salvaging the flight.

3. On short final the captain pitched the aircraft nose-down in an attempt to capture the glideslope which was below their flight path. The nose-down attitude increased the airspeed resulting in a longer flare and a touchdown beyond the recommended 1000-feet mark, thus reducing the amount of available runway for stopping.

4. The autothrottle system was not disengaged below 50 feet, which resulted in the A/T system increasing thrust in order to maintain the selected airspeed. This increase in thrust delayed the deployment of the speed brakes and thrust reversers, which left insufficient runway in which to stop.