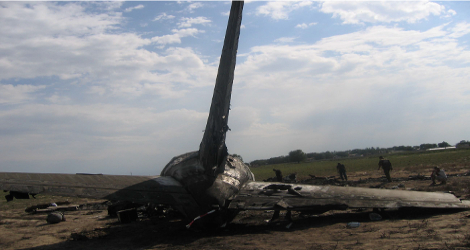 Itek Air flight IRC6895 was a flight from Bishkek to Teheran, flown on 24 August, 2008 with a Boeing 737-200 aircraft registered ЕХ-009 .
Souls onboard where the PIC plus co-pilot, cabin crew (3 persons) as well as 85 passengers including two service passengers: a maintenance engineer and a representative of the Iran Aseman Airlines.

The crew of Itek Air flight IRC6895 passed a medical examination in the ground medical office of Manas Airport. The crew did not have any complaints of their health. The crew received a complete preflight briefing.

The weather at the departure airport Manas, the destination airport and at alternate aerodromes was favourable for the flight.

After the climb to approximately 3000 m the crew informed the ATC about a pressurization system fault and decided to return to the aerodrome of departure. While they were descending for visual approach the aircraft collided with the ground, was damaged on impact and burnt.

The cause of the Itek Air flight IRC6895 was a flight from Bishkek to Teheran, flown on 24 August, 2008 with a Boeing 737-200 aircraft registered ЕХ-009 . was due to the cabin not pressurizing (probably caused by the jamming of the left forward door seal).

The crew of Itek Air flight IRC6895 allowed the aircraft to descend at night to a lower than the minimum descent altitude for visual approach which resulted in the crash with damage to the aircraft followed by the fire and fatalities.

The combination of the following factors contributed to the accident: