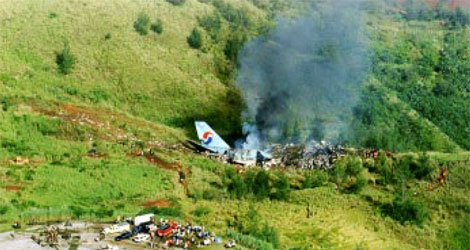 The captain was fatigued, which degraded his performance and contributed to his failure to properly execute the approach.

Korean Air flight KL801 had been cleared to land on runway 6 Left at A.B. Won Guam International Airport, Agana, Guam, and crashed into high terrain about 3 miles southwest of the airport. Of the 254 persons on board, 228 were killed, and 23 passengers and 3 flight attendants survived the accident with serious injuries. The airplane was destroyed by impact forces and a postcrash fire.

The National Transportation Safety Board determines that the probable cause of Korean Air Flight KL801 crash was the captain’s failure to adequately brief and execute the nonprecision approach and the first officer’s and flight engineer’s failure to effectively monitor and cross-check the captain’s execution of the approach. Contributing to these failures were the captain’s fatigue and Korean Air’s inadequate flight crew training.
Contributing to the accident was the Federal Aviation Administration’s intentional inhibition of the minimum safe altitude warning system at Guam and the agency’s failure to adequately manage the system.