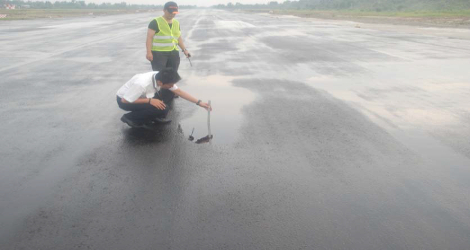 The persons on board this Lion Air flight LNI392 were 219 and consisted of 7 crewmember (2 pilots and 5 flight attendants), 209 adults and 3 infant passengers.

While on route to Pekanbaru, the pilot received information from Jakarta Control controller that the weather at Pekanbaru was heavy rain with ground visibility 1 Km.

While approaching Pekanbaru, the pilot saw on the weather radar that the Cumulonimbus cloud formation was over KAMPA holding point. The pilot decided to wait for the weather improvement and made holding at 5000 feet on radial 181 and 20 Nm from PKU VOR to avoid the CB cloud.

During holding, the Tower controller informed that the visibility was 1 Km. The pilot saw the wind velocity indicated on the AFIS was up to 50 knots.

After completed 2 holding patterns, the weather was improving and ground visibility increases to 3 Km which was higher that the minima for ILS approach.

The pilot decided to make ILS approach RW 36 and descend to 2500 feet.

During approach on long final runway 36, the aircraft was entering the Cumulonimbus. The aircraft flew out of the cloud just before intercept the glide slope and runway was insight.

The Tower controller gave clearance to land and informed that the wind was calm.

At that time, the pilot saw a head wind condition of 11- 12 knots on the Flight Management Computer (FMC).

The aircraft landing weight was 66,066 kg. The landing configuration was used flap 40 and the auto brake at position 3.

The pilot felt no significant deceleration. At below speed 90 knots the pilot applied manual brake up to maximum.

The aircraft stop on the stop way on approximately heading 320 with right main wheel on the right side of the pavement.

The pilot contacted the Tower controller and informed that the aircraft has stop out of runway and request for assistant.

After waited for approximately 20 minutes, all passengers disembarked through the front passenger door used the passenger stair.

No one injured in this serious incident.

The following issues are the significant findings that most probably contribute to this serious incident.

The aircraft was decelerated according to the preselected value until the thrust reversers stowed which was known at the last 1000 feet of the runway available and the aircraft speed approximately 70 knots. According performance calculation the aircraft should be able to stop on the remaining runway available. The failure of the aircraft to stop most likely due to the significant deterioration of both the runway friction and brake effectiveness as result of the existing of the combination of the rubber deposit and water spots.