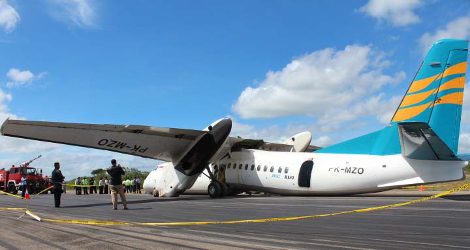 On board this aircraft were 2 pilots, 2 flight attendants with 46 passengers consisted of 45 adults and 1 infant. The flight was the second sectors for the aircraft and the crew on that day. The first flight was from Kupang to Bajawa Airport.

The Merpati Nusantara Airlines flight MZ6517 from the departure until commencing for approach was uneventful.

At 0122 UTC, the pilot made first communication with El Tari Control Tower controller (El Tari Tower) and reported their position was on radial 298° 110 Nm from KPG VOR3 and maintaining 11,500 ft.

At 0138 UTC, the pilot reported the aircraft was passing 10,500 ft and stated that the flight was on Visual Meteorological Condition (VMC).

At 0150 UTC, the aircraft position was on left base runway 07 at 5 Nm from KPG VOR. The El Tari Tower had visual contact with the aircraft and issued a landing clearance with additional information that the wind condition was 120° at 14 kts, QNH 1010 mbs.

At 0151 UTC, the pilot reported that their position was on final and the El Tari Tower re-issued the landing clearance.

The Flight Data Recorder (FDR) recorded that the left power lever of Merpati Nusantara Airlines flight MZ6517 was in the range of BETA MODE while the aircraft altitude was approximately 112 ft and followed by the right power lever at 90 ft until hit the ground.

At 0154 UTC, the aircraft touched down at about 58 meters and halted on the runway at about 261 meters from the beginning of runway 07.

After the aircraft stopped, the flight attendants assessed the situation and decided to evacuate the passengers through the rear main entrance door.