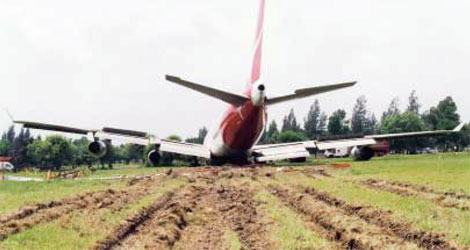 The overrun occurred after the aircraft landed long and aquaplaned on a runway which was affected by water following very heavy rain.

The aircraft sustained substantial damage during the overrun. None of the three flight crew, 16 cabin crew or 391 passengers reported any serious injuries.

When the aircraft was approximately 10 ft above the runway, the captain instructed the first officer to go around.

As the first officer advanced the engine thrust levers, the aircraft’s main wheels touched down (1,002 m along the 3,150 m runway, 636 m beyond the ideal touchdown point).

The captain immediately cancelled the go-around by retarding the thrust levers, without announcing his actions.

Those events resulted in confusion amongst the other pilots, and contributed to the crew not selecting (or noticing the absence of) reverse thrust during the landing roll.

Due to a variety of factors associated with the cancellation of the go-around, the aircraft’s speed did not decrease below the touchdown speed (154 kts) until the aircraft was 1,625 m or halfway down the runway.

Parts 1 to 4 identified several unsafe acts and active failures that had a significant influence on the development of the accident. These were:

Other significant active failures were: