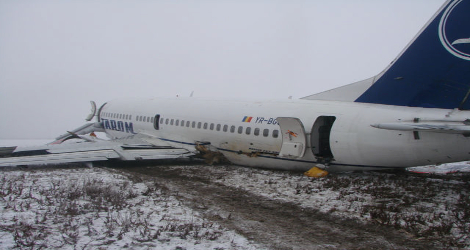 On December 30th, 2007 the TAROM flight ROT3107, registered YR-BGC was scheduled for the flight ROT 3107 Bucharest – Sharm el Sheik. At 09:27 UTC, during the take-off procedure from runway 08R at “Henri Coandă” International Airport Bucharest, the aircraft collided with a vehicle used by the runway lighting maintenance team. As consequence of the impact the aircraft was damaged and went out from the runway, stopping about 137 m left side from the runaway centre line and about 950 m from the threshold. After the aircraft stopped the emergency evacuation was initiated.

The accident occurred due to incorrect taxi and take-off clearance for the TAROM flight ROT3107 without ensuring the runway clearing.

The error to clear the take-off of flight ROT 3107, was possible on the background of a long activity interruption of the CTA EXE TWR, incorrect perceiving of the runway clearance status together with the lack of coordination between the CTA EXE TWR and the CTA GND/TAXI to clear the runway.

The requirements of RCASTA and LVO procedures were not fully applied by the involved traffic controllers. The team supervisor, who had the duty to directly observe the application of this procedure did not recognized this fact and did not undertake corrective measures.

Progressive record strips were not in accordance with the valid procedures and regulations.

The previous conclusions underline gaps in the training process of ATC staff, i.e. knowledge and complete and correct follow-up of applicable procedures.

Deficient management of human resources at TWR OTP, that resulted in an insufficient number of ATCs in the shift team, as well as the absence of the team supervisor from the operations room at the accident occurrence hour in the conditions when he accepted a team with 4 ATCs.

The “Circulation regulation for vehicles and persons”, R – SIG 001, and of “Regulation on organization and performing radio communication in multiple access radio systems”, R – SIG – 007, and the “Local Low Visibility Operations (LVO) Procedures” were not rigorously observed. These regulations include uncorrelated or unclear provisions that might be wrong understood and make difficult their rigorous application.