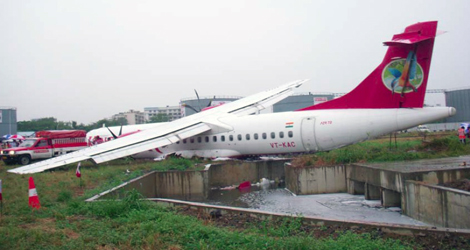 Kingfisher Airlines flight IT4124 , an ATR-72-212 aircraft VT-KAC was schedule to operate flight IT4123 Mumbai-Bhavnagar and IT-4124 (Bhavnagar –Mumbai) on 10.11.2010. Prior to operating the flight IT-4123 both the crew underwent the pre-flight medical examination and carried out self briefing in the despatch. Self briefing was done by the commander covering the NOTAM’s and prevailing weather conditions and short runway operation out of Mumbai TORA, TODA, LDA and ASDA holding and diversion considerations was discussed with the Co-pilot.

Kingfisher Airlines flight IT4124 took off from Mumbai at 13:44 hrs and arrived Bhavnagar at 14:59 hrs. The flight from Mumbai to Bhavnagar was uneventful. At Bhavnagar crew again had briefing however as per the Co-pilot the briefing out of Bhavnagar was mainly on weather, there was general briefing for runway 27A however no specific briefing was given by the Commander for special localizer approach procedure to be followed for 27A.

After a halt of 37 minutes aircraft again took off from Bhavnagar at 15:36 hrs. There were 36 passengers 2 Infants and four crew members on board the aircraft. Kingfisher Airlines flight IT4124 came in contact with ATC Approach, Mumbai around 17NM to touchdown. The ATC instructed KFR 4124 to continue approach. On the day of accident, secondary runway 14/32 was under maintenance and the primary runway 09/27 was available after runway intersection as 27A.

A day prior to 27A operation, Chief Flight Inspector of Flight Standard Directorate had telephonically intimated all the schedule operators and followed by written communication about the conditions required to be followed for safe operations of the flight. As per the instructions “only training captains are to be utilized for flight and the Co-pilot should have minimum 300 hours of experience on type. Further no assisted take off and landing is permitted and no operation shall take place when runway surface is wet”. Also pilots are required to file debriefing report after every flight. The crew on the accident flight was not meeting the cockpit qualification required to operate the flight since the commander was not the training captain. 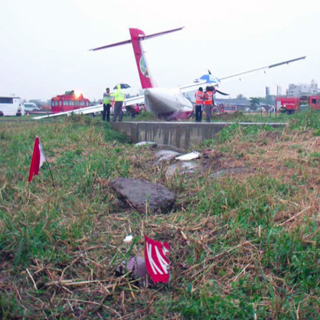 Considering the 27A operation AAI had issued a NOTAM GO129 dated 10 Nov.2009 for runway 27A Operations stating very clearly that ILS for runway 27A was not available. Further Final Approach Fix (FAF) was 9.5 DME in place of 10 DME and distance Vs altitude chart was given in the NOTAM for operation.

The Aerodrome operating minima was given as 2800 m for CAT C aircrafts operating with performance suitable for runway 27. This procedure shall only be applicable for shortened runway 27A operation only. As per NOTAM only information for localizer approach for runway 27A will be available and the landing distance available 1703 m will be transmitted on DATIS during the operation on runway 27A. However there was no information on the NOTAM restricting the operation on wet runway.

The current weather report from DATIS was obtained 25 minutes prior to landing by the crew to confirm the weather and runway conditions .

Pilot conducted the approach briefings and the weather conditions were reviewed with runway 27A in use considering the effective NOTAM.

The ATC gave vectors for the LOC 27A and instructed Kingfisher to fly heading 230 and intercept the LOCALISER (LOC) with DME to touch down at that time the aircraft was at 14 DME. ATC then instructed aircraft to intercept the LOC with 13 DME to touchdown. The LOCALIZER (LOC) approach was made. Kingfisher Airlines flight IT4124 was cleared for the approach and intercept the LOC at 13 DME. At that point of time the aircraft altitude was 3700 ft. After intercepting LOC the crew initiated rapid descent from 3700 ft to MDA (540ft) at 10 DME. The crew set landing configuration and initiated a rapid descent after radar advised the aircraft that they were high and not on profile.

The pilot of Kingfisher Airlines flight IT4124 disconnected the autopilot in order to descent fast by manually flying the aircraft. Flaps 15 were selected at 07 DME. At 140 kts, gear was selected down. The descent was continued and FLAPS 30 were selected down. The ATC called for confirming runway in sight. At 03 DME at 2200 ft ALT the crew confirmed runway in sight. The Pilot continued the descent and saw the PAPI’s all 4 whites. Subsequently, the pilot reduced power and Condition lever were advanced to 100% OVRD in order to be on profile. At 200 ft. the crew regained 2 whites and 2 reds and continued to land i. e. on profile.

The Pilot of Kingfisher Airlines flight IT4124 realized that the aircraft was skidding and moving towards the left with little deceleration.

Seeing the runway end the pilot initiated 45° right turn after crossing N 10 Taxi track and exited the runway. It rolled into unpaved wet area. Just prior to leaving the runway the pilot called out for the Condition Levers to feather/fuel shutoff. After the aircraft had stopped, the right engine kept on running though the Condition Lever was selected to ‘ shutoff ’. The cockpit crew then pulled the right emergency handle followed by the left emergency handle but the engine failed to shutoff. The pilot then looked for the hand mike to order evacuation to the cabin crew but could not find the mike and then opened the emergency hatch. The pilot evacuated from the emergency exit and then assisted co-pilot to evacuate. The cockpit crew then went to the left side forward cabin emergency exit and assisted the cabin crew with the evacuation of passengers.

All the passengers including crew evacuated safely without any injuries. There was no fire.

The accident occurred due to unstabilized approach and decision of crew not to carry out a ‘Go-around’.

Are Arann flight EI3601 commenced operations in EINN that morning, departing at 05.52 hrs and arriving at EGCC at 07.13 hrs. During the turnaround, fuel was uplifted and 21 passengers boarded. Using the call sign Air Arann flight EI3601 the scheduled passenger service...
Read More