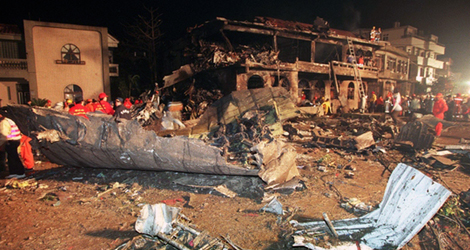 This was the first flight the two pilots had flown together. The flight took off from DPS International airport at 15:27L (07:27 UTC). The preflight check report shows no abnormality and take-off conditions revealed no problems.

The crew contacted approach control at 11:53:56 UTC and was given descent clearance to 7000 ft, QNH 1014 and was told to expect runway 05L. The crew was given radar vectors and at 11:57:43 UTC the approach controller issued an instruction for the crew to descend to 4000 ft. This instruction was not acknowledged by the crew and the controlled did not challenge the crew about lack of response.

This was the last communication from the aircraft. The controller asked: “Dynasty 676 confirm go-around?”
There was no response.

During its go-around, the aircraft stalled and then, at approximately 12:05:58 UTC, impacted highway 15 of Da-Yuan, Tau-Yuan next to runway 05L. The aircraft crushed 5 residences and damaged 3. The 14 crew and 182 passengers, and 6 residents were killed. The aircraft was totally destroyed and the wreckage scattered. Fire-extinguishing and rescue actions were performed immediately.

go around was initiated : during this period, there was a misunderstanding between the pilots concerning the actions to be performed. The landing gear was retracted before the flaps […] the pitch attitude increased […] reached 30 degrees nose-up […] then 43° degrees and 93 knots : the aircraft stalled .

The investigation team recognized that the following combination of factors contributed to the accident: