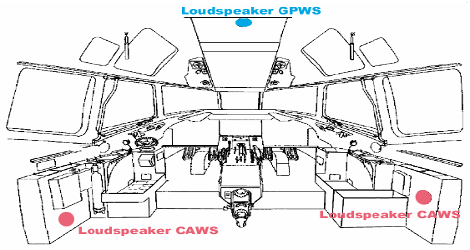 The evolution of the Aom Minerve flight IW68 was analyzed on the basis of flight documents, recorded data and witness statements.

On Sunday 23 November 1997, the crew flew the Toulon-Orly-Marseille route stages : on the previous day, they had flown the Orly-Nice-Orly-Toulon route stages.

The airplane, an MD83 registered F-GRMC, landed at Marseille at 10 h 35. During the preparation of the Marseille-Orly flight, the crew received a meteorological file. The alternate airport was Paris-Charles de Gaulle.

The flight dossier indicated that Aom Minerve flight IW68 was carrying 20,000 pounds of fuel. The Captain stated that he had loaded sufficient fuel in reserve to return to the South of France in case the meteorological conditions made a landing at Orly impossible.

At 11 h 25, the airplane took off from Marseille with 131 passengers and 7 crewmembers. The co-pilot was pilot flying.

The flight took place without any notable events until the preparation of the approach to Orly.

The autothrottle and autopilot 2 were connected throughout the flight. The crew prepared category I, II and III precision approaches on runways 07 and 26 at Orly.

At 12 h 07 the Captain of Aom Minerve flight IW68 took over as pilot flying.

The co-pilot did not check the display.

At 12 h 29 min 34 s, Orly Approach ended radar vectoring and transferred the airplane to the Tower controller at an altitude de 3,000 feet, at a speed of 160 kt, on heading 020° for interception of the runway 07 ILS. The co-pilot had selected track 065° on the OL VOR. He announced that the airplane was crossing this track. 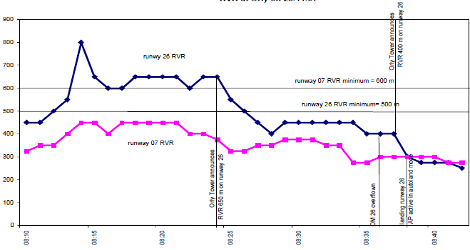 Subsequently the Captain did not announce the actions he took relative to the automatic systems.

The airplane came back towards the approach track and descended in clear skies.

The Captain then realized that he had selected an ILS heading of 258° instead of 065° and corrected it.

A short time afterwards, Orly Tower indicated that the airplane was 1.5 NM north of the track. The flaps were extended to 40° and the Captain selected the final approach speed. During this time, the airplane went below the glideslope track. Then, with the Captain’s authorization, the co-pilot selected the ILS on the right side, instead of the OL VOR.

From 12 h 31 min 26 s, at a radio height of 916 feet, the Ground Proximity Warning System (GPWS) “Glideslope” warning was recorded by the QAR. The airplane entered the fog at that moment or a few seconds later.

During the descent, the pilot of Aom Minerve flight IW68 saw that the bar of the glideslope track was up against its stop and said “glide” twice.

The Captain tried to bring the airplane back onto the approach track. At 12 h 31 min 43 s, the “LOC capture” mode appeared on the FMA again. At 12 h 31 min 49 s, the Captain re-connected the autopilot, at a radio-height of 415 feet. He then armed the “autoland” mode.

At a radio-height of 279 feet, the “terrain” warning was recorded again for a further nine seconds. At 12 h 31 min 56 s, the Captain disconnected the autopilot and began a go-around.

At that moment, the radio-height was about 200 feet. At 12 h 32 min 09 s, the minimum radio-height of 67 feet and the Outer Marker signal were recorded. The co-pilot would state that he saw the ground and read a radio-height of about 50 feet The go around and the runway circuit were performed with radar vectoring.

The landing took place in “autoland” mode. The airplane landed at Orly at 12 h 45.

The incident of Aom Minerve flight IW68 resulted from the decision to put the airplane into descent when, as a result of a display error, it was neither on the localizer track nor on the glide path, and with no context defined for this improvised maneuver.

The importance that Aom Minerve flight IW68 attached to accelerated training given to new co-pilots and to undertaking commercial flights contributed directly to the incident.

Other contributory factors were:

Sichuan Airlines flight 3U8949 was an Airbus A319 (B-6054) . The plane took off from Chongqing airport at 07:45. At 08:47, the flight crew confirmed that the special report about the thunderstorms at Destination airport (see Appendix I) sent by CSC Dispatching Office...
Read More